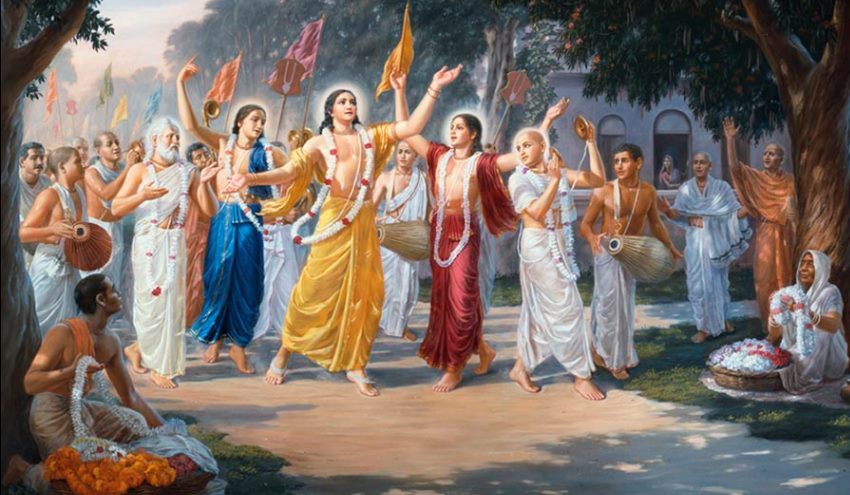 Lord Chaitanya Mahaprabhu is none other than Supreme Lord Sri Krishna, who appeared in this Kali-yuga to inaugurate the yuga dharma for this age – Sankirtana, the congregational chanting of the Holy Names of the Lord.

Lord Chaitanya Mahaprabhu appeared at Sridhama Mayapura, in the city of Navadvipa in Bengal, on the Phalguni Purnima evening in the year 1486 AD. His father, Sri Jagannatha Mishra, a learned brahmana from the district of Sylhet, came to Navadvipa as a student. He lived on the banks of the Ganges with his wife Srimati Sachidevi, the daughter of Srila Nilambara Chakravarty, a great learned scholar of Navadvipa. Their youngest son, who was named Vishvambhara, later became known as Nimai Pandita and then, after accepting the renounced order of life,  Lord Chaitanya Mahaprabhu.

The wonderful pastimes performed by Sri Chaitanya Mahaprabhu in the city of Navadvipa and in Jagannath Puri are recorded by His biographers. The early life of the Lord is most fascinatingly expressed by the author of Chaitanya-bhagavata (Sri Vrindavana Dasa Thakura), and as far as the teachings are concerned, they are more vividly explained in the Chaitanya-Charitamrita (by Sri Krishna Dasa Kaviraja Gosvami). Now they are available to the English-speaking public in our Teachings of Lord Chaitanya.

By the mercy of Lord Caitanya Mahāprabhu, even a foolish child can fully describe the real nature of Lord Kṛṣṇa, the enjoyer of the pastimes of Vraja, according to the vision of the revealed scriptures. (Ādi-līlā Chapter 4, Text 1)

One can ascertain the meaning of this Sanskrit śloka only when one is endowed with the causeless mercy of Lord Caitanya. Lord Śrī Kṛṣṇa, being the absolute Personality of Godhead, cannot be exposed to the mundane instruments of vision. He reserves the right not to be exposed by the intellectual feats of nondevotees. Notwithstanding this truth, even a small child can easily understand Lord Śrī Kṛṣṇa and His transcendental pastimes in the land of Vṛndāvana by the grace of Lord Caitanya Mahāprabhu. (purport to Adi. 4.1)

“May that Lord who is known as the son of Śrīmatī Śacīdevī be transcendentally situated in the innermost core of your heart. Resplendent with the radiance of molten gold, He has descended in the Age of Kali by His causeless mercy to bestow what no incarnation has ever offered before: the most elevated mellow of devotional service, the mellow of conjugal love.” (Ādi-līlā Chapter 3, Text 4)

“I shall personally inaugurate the religion of the age-nāma-saṅkīrtana, the congregational chanting of the holy name. I shall make the world dance in ecstasy, realizing the four mellows of loving devotional service. (Adi3.19)

“I shall accept the role of a devotee, and I shall teach devotional service by practicing it Myself.

“Unless one practices devotional service himself, he cannot teach it to others. This conclusion is indeed confirmed throughout the Gītā and Bhāgavatam.

’Whenever and wherever there is a decline in religious practice, O descendant of Bharata, and a predominant rise of irreligion-at that time I descend Myself.

’To deliver the pious and to annihilate the miscreants, as well as to reestablish the principles of religion, I Myself appear, millennium after millennium.’

’If I did not show the proper principles of religion, all these worlds would fall into ruin. I would be a cause of unwanted population and would spoil all these living beings.’

” ’Whatever actions a great man performs, common people follow. And whatever standards he sets by exemplary acts, all the world pursues.’

“My plenary portions can establish the principles of religion for each age. No one but Me, however, can bestow the kind of loving service performed by the residents of Vraja.

” ’There may be many all-auspicious incarnations of the Personality of Godhead, but who other than Lord Śrī Kṛṣṇa can bestow love of God upon the surrendered souls?’

This quotation from Bilvamaṅgala Ṭhākura is found in the Laghu-bhāgavatāmṛta (1.5.37).

“Therefore in the company of My devotees I shall appear on earth and perform various colorful pastimes.”

Thinking thus, the Personality of Godhead, Śrī Kṛṣṇa Himself, descended at Nadia early in the Age of Kali.

Thus the lionlike Lord Caitanya has appeared in Navadvīpa. He has the shoulders of a lion, the powers of a lion, and the loud voice of a lion.

May that lion be seated in the core of the heart of every living being. Thus with His resounding roar may He drive away one’s elephantine vices.