This year commemorates the 50th anniversary of ISKCON. It was established by our beloved Founder and Acharya His Divine Grace A.C. Bhaktivedanta Swami Prabhupada in New York. He travelled to America, on the order of his spiritual master and after one year of various hardships struggling alone, he could establish this institution in the year 1966. We are greatly indebted for the selfless work of Srila Prabhupada. The Kannada biographical work titled ‘Mahasadhaka’ on the sublime life of Srila Prabhupada, was released last year. This year we have organised few events around this book.

We have conducted a Seminar and Kavya Goshthi on ‘Mahasadhaka’ at Rajangana, Krishna Matha, Udupi on July 3, 2016, under the holy presence of His Holiness Sri Sri Vishwesha Tirtha Swamiji of Paryaya Sri Pejavara Adhokshaja Matha. His Holiness remarked “It is due to Srila Prabhupada that the bhakti siddhanta advocated by Sri Madhavacharya reached an international level. The word Mahasadhaka clearly applies to Srila Prabhupada.” He further said “Srila Prabhupada holds the credit for spreading the philosophy of devotion to Sri Krishna along with a revolution in moral living all over the world.” Drawing a comparison between the Sri Krishna Matha and ISKCON to two branches of the same tree, he expressed his wishes for their unceasing growth. In this seminar many prominent scholars and academics were present and extensively discussed about the life of Srila Prabhupada. Similarly we had conducted another event in Dharwad.

Srila Prabhupada is a true ambassador of Indian culture, he led an exemplary life exactly as per the revealed scriptures. Thousands of Western youth were transformed by his teachings and actions. They were inspired to embrace Vedic culture. His deep compassion for all humanity, irrespective of nation, colour or religion, empowered him to reach out to people across the globe. In a just a few years, Srila Prabhupada established 108 centers of Sanathana Dharma all over the world.

This year also has another significant milestone in the history of Madhva Gaudiya Sampradaya. For the first time in the history, ISKCON Bangalore in association with Sri Krishna Matha, Udupi celebrated, Sri Chaitanya Jayanti Sambramotsava, to commemorate the appearance of Sri Chaitanya Mahaprabhu. The event was organized at the invitation of His Holiness Sri Sri Vishvesha Tirtha Swamiji of Paryaya Sri Adhokshaja Matha. In this event many commonalities between Chaitanya Sampradaya and Madhva Sampradaya were examined. Sri Vyasankare Prabhanjanacharya said “If the importance of worshipping Krishna was taught by Sri Madhvacharya, the significance of sankirtana was heralded the world over by Sri Chaitanya.” His Holiness Sri Sri Vishvesha Tirtha Swamiji said “Udupi is Lord Chaitanya’s karma bhumi, for it is also from here that He preached the message of bhakti. Therefore, that Chaitanya Jayanti is being celebrated here gives us great pleasure. Madhvacharya’s philosophy and Lord Chaitanya’s philosophy are not different. They are the same. ISKCON’s preaching Bhakti all
over the world is a great achievement. Therefore we are very proud of ISKCON.”

I am happy to inform you that the construction work on the much – awaited Krishna Lila Theme Park and the Rajadiraja Govinda temple at the site of the Society’s headquarters on the 28 acres of land in Bangalore south at Vasantapura on Kanakapura Road, is going on in full swing. In March 2016, we had Ananta Sesha sthapana in the Rajadiraja Govinda temple. With the blessings of Lord Krishna we should be able to complete the project in the next three years. On completion, it will be a facility of 1.5 million square feet of built-up area, dedicated to preserving and distributing the teachings of Lord Krishna and the culture of Sanatana Dharma. It is expected to become an iconic project of religious tourism.

I invoke the blessings of Their Lordships Sri Sri Radha Krishnachandra upon all the stakeholders of ISKCON Bangalore who always support our humble efforts totake spirituality to all.

– May Lord Krishna bless us all. 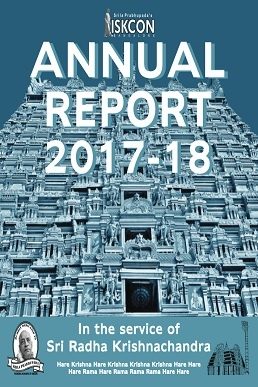 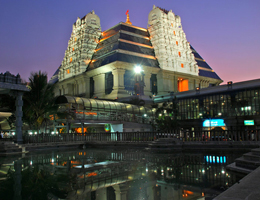 In 1987, the society was operating from a rented house in Bangalore. In the year 1987, the leaders of the society applied to Bangalore Development Authority (BDA) for allotment of land to construct a grand temple and cultural complex.