Read this sweet pastime of Krishna – Damodara-lila. Find out how the unconquerable Lord was conquered by His mother, Yashoda.

Once, seeing that her maidservant was engaged in different household work, mother Yashoda personally churned butter. While she churned butter, she sang the wonderful childhood pastimes of her son Krishna and relished thinking of Him. At that time Krishna appeared there and was hungry. He wanted her to stop churning the butter and feed Him first.

Mother Yashoda took her son on her lap and started feeding Him. While Krishna was sucking the milk, mother Yashoda smiled and enjoyed the beauty of Her child Krishna. Suddenly, the milk which was on the stove began to boil over. Just to stop the milk from spilling, mother Yashoda at once put Krishna aside and went to the stove. Left in that state by His mother, Krishna became very angry, and His lips and eyes became red in rage. He pressed His teeth and lips, and taking up a piece of stone, He immediately broke the butter pot. He took butter out of it, and with false tears in His eyes, He began to eat the butter in a secluded place.

In the meantime, mother Yashoda returned to the churning place after setting the overflowing milk pan in order. She saw the broken pot, in which the churned yogurt had been kept. Since she could not find her boy, she concluded that the broken pot was His work. She smiled as she thought, “The child is very clever. After breaking the pot He has left this place, fearing punishment.” After she sought all over, she found her son sitting on a big wooden grinding mortar, which was kept upside down. He was taking butter from a pot which was hanging from the ceiling on a swing, and He was feeding it to the monkeys. 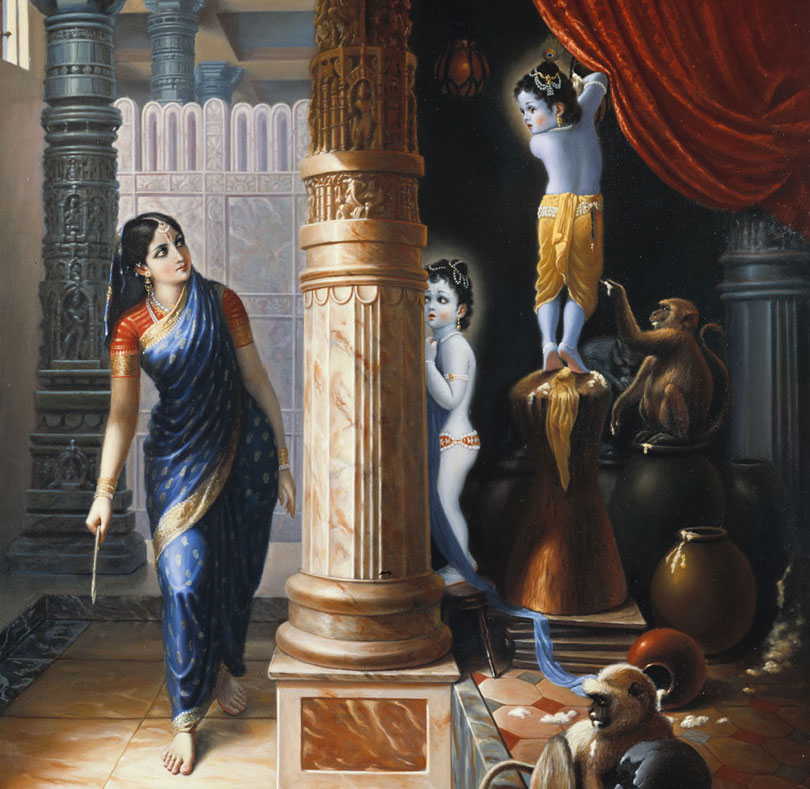 She saw Krishna looking this way and that way in fear of her because He was conscious of His naughty behavior. After seeing her son so engaged, she very silently approached Him from behind. Krishna, however, saw her coming toward Him with a stick in her hand, and He immediately got down from the grinding mortar and began to flee in fear. Mother Yashoda chased Him to all corners, trying to capture the Supreme Personality of Godhead, who is never approached even by the meditations of great yogis. In other words, the Supreme Personality of Godhead, Krishna, who is never caught by the yogis and speculators, was playing just like a little child for such a great devotee as mother Yashoda. Mother Yashoda, however, could not easily catch the fast-running child because of her thin waist and heavy body. Still she tried to follow Him as fast as possible. Her hair loosened, and the flowers in her hair fell to the ground. Although she was tired, she somehow reached her naughty child and captured Him. When He was caught, Krishna was almost on the point of crying. He smeared His hands over His eyes, which were anointed with black eye cosmetics. The child saw His mother’s face while she stood over Him, and His eyes became restless from fear. Mother Yashoda could understand that Krishna was unnecessarily afraid, and for His benefit she wanted to allay His fears. Being the topmost well-wisher of her child, mother Yashoda thought, “If the child is too fearful of me, I don’t know what will happen to Him.” Mother Yashoda then threw away her stick. In order to punish Him, she thought of binding His hands with some ropes. She did not know it, but it was actually impossible for her to bind the Supreme Personality of Godhead. Mother Yashoda was thinking that Krishna was her tiny child; she did not know that the child had no limitation. There is no inside or outside of Him, nor beginning or end. He is unlimited and all-pervading. Indeed, He is Himself the whole cosmic manifestation. Still, mother Yashoda was thinking of Krishna as her child. Although He is beyond the reach of all senses, she endeavored to bind Him to a wooden grinding mortar. But when she tried to bind Him, she found that the rope she was using was short by two inches. She gathered more ropes from the house and added to it, but still she found the same shortage. In this way, she connected all the ropes available at home, but when the final knot was added, she saw that the rope was still two inches short. Mother Yashoda was smiling, but she was astonished. How was it happening?

In attempting to bind her son, she became tired. She was perspiring, and the garland on her head fell down. Then Lord Krishna appreciated the hard labor of His mother, and being compassionate upon her, He agreed to be bound up by the ropes. Krishna, playing as a human child in the house of mother Yashoda, was performing His own selected pastimes. Of course, no one can control the Supreme Personality of Godhead. The pure devotee surrenders himself unto the lotus feet of the Lord, who may either protect or vanquish the devotee. But for his part, the devotee never forgets his own position of surrender. Similarly, the Lord also feels transcendental pleasure by submitting Himself to the protection of the devotee. This was exemplified by Krishna’s surrender unto His mother, Yashoda.

Krishna is the supreme bestower of all kinds of liberation to His devotees, but the benediction which was bestowed upon mother Yashoda was never experienced even by Lord Brahma or Lord Shiva or the goddess of fortune.

The Supreme Personality of Godhead, who is known as the son of Yashoda and Nanda Maharaja, is never so completely known to the yogis and speculators. But He is easily available to His devotees.

After binding her son, mother Yashoda engaged herself in household affairs. At that time, bound up to the wooden mortar, Krishna could see a pair of trees before Him which were known as arjuna trees. The great reservoir of pleasure, Lord Sri Krishna, thus thought to Himself, “Mother Yashoda first of all left without feeding Me sufficient milk, and therefore I broke the pot of yogurt and distributed the stock butter in charity to the monkeys. Now she has bound Me up to a wooden mortar. So I shall do something more mischievous than before.” And thus He thought of pulling down the two very tall arjuna trees.

There is a history behind the pair of arjuna trees. In their previous lives, the trees were born as the human sons of Kuvera, and their names were Nalakuvara and Manigriva. Fortunately, they came within the vision of the Lord. In their previous lives they were cursed by the great sage Narada in order to receive the highest benediction of seeing Lord Krishna. This benediction-curse was bestowed upon them because of their forgetfulness due to intoxication.

Read what happened next… The Deliverance of Nalakuvara and Manigriva