This article talks about Ratha Yatra of Lord Jagannatha, its history, significance and so on as explained by Srila Prabhupada. 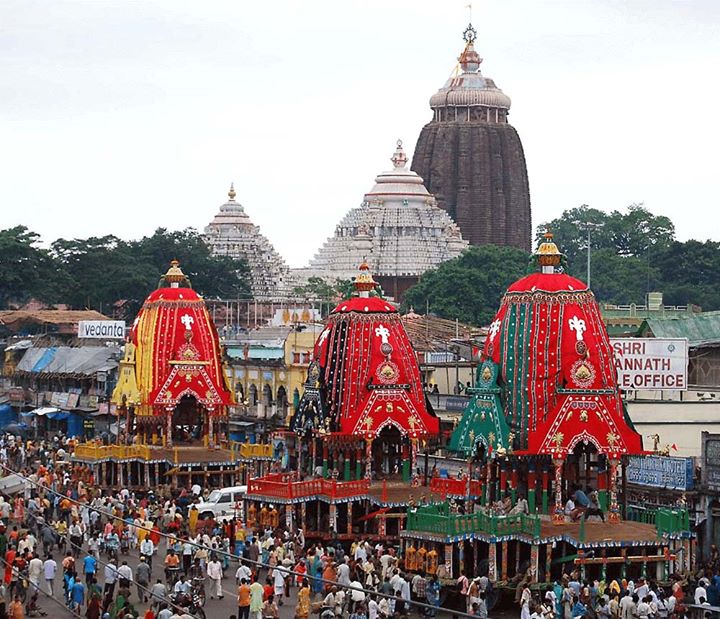 Ratha Yatra (Festival of Chariots) is one of the world’s oldest religious festivals, originally celebrated in Jagannath Puri. By the mercy of Srila Prabhupada this festival is now being celebrated all over the world. In the summer of 1967, the city of San Francisco saw the Western world’s first Ratha Yatra. Many other swamis and yogis journeyed to the West in the past, but none of them had the vision of Srila Prabhupada: to establish the Krishna conscious culture of ancient India without watering it down. Srila Prabhupada introduced Lord Jagannatha to the Western world and also inaugurated the Ratha Yatra ceremony, in its original format. Jayananda dasa, one of Srila Prabhupada’s early disciples, took an active part in making it a success. For each of the first four Ratha Yatras, he built the chariots from the ground up.

In the Brahmanda Purana it is said, “A person who sees the Lord’s Ratha Yatra (car festival) and then stands up to receive the Lord can purge all kinds of sinful results from his body.” In the Bhavishya Purana, it is said, “Even if born of a lowly family, a person who follows the Ratha Yatra car when the Deities pass in front or from behind will surely be elevated to the position of achieving equal opulence with Vishnu.”

Jagannatha, Baladeva and Subhadra. Jagannatha means the Lord of the Universe. Jagat means the moving world. gacchati iti jagat. In the material world everything is moving. The planets are moving; the sun is moving; even the trees that stand still are continuously moving. The living entities are also transmigrating from one species of life to another. In that sense also there is constant movement. So this material world is called Jagat and the Supreme Lord is Jagannatha – the proprietor of all these movements. Balarama. Bala means strength and rama means enjoyment. Balabhadra or Balarama gives us spiritual strength for enjoying eternal blissful life. And then Subhadra: su means auspiciousness and bhadra means well-being. Subhadra, Jagannatha and Balarama combined together are present before us to reclaim us all from the miserable conditions of life. If anyone sees on the cart Jagannatha, Baladeva and Subhadra, then he does not take birth again in this material world.

Formerly there was a king named Indradyumna. He established the temple of Lord Jagannatha at Puri in Odisha. This King was very much anxious to establish a temple for the Lord and he asked Vishvakarma to carve the Deities of Jagannatha, Balarama and Subhadra. Vishvakarma agreed but on a condition that till the carving is finished he should not be disturbed. He worked behind closed doors. But there was a time limit. The King, who was very anxious to see that the temple is established soon, forcibly opened the door, and he saw that the Deities were half finished. However, he decided to worship the half-finished Deities in the temple. Since then, the three Deities – Jagannatha, Baladeva and Subhadra – are being worshiped.

The Ratha Yatra takes place every year, and millions of people go there to participate in the car festival. It is celebrated in commemoration of Lord Krishna along with His elder brother, Balarama, and His younger sister, Subhadra, visiting Kurukshetra on the occasion of a solar eclipse. Kurukshetra is about ninety miles north of Delhi. It is a place of pilgrimage and people still gather there, especially during the solar and lunar eclipse. Five thousand years ago, Krishna was the prince of Dvaraka and He came to Kurukshetra with His elder brother Balarama and sister Subhadra. As we all know, in His childhood, Krishna was raised as the foster son of Nanda Maharaja and Yashoda in Vrindavana. But later He left Vrindavana and the people there became very unhappy. So when Krishna came to Kurukshetra, the people of Vrindavana got the news and they came to see Krishna. Srimati Radharani, the most beloved personality, requested Krishna to come back to the village and pulled his ratha to take him to Vrindavana. It is a very ecstatic feeling.

Lord Chaitanya Mahaprabhu took sannyasa at the age of twenty-four and on His mother’s request He was living at Jagannatha Puri. Every year He was taking part in the car festival of Jagannatha. He was in the same mood of separation as Srimati Radharani. So this Ratha Yatra festival is a festival of feelings. It is very nice and anyone who is participating in this festival will gradually develop his dormant love for Krishna.

In India, it is a very grand festival and following in the footsteps of Lord Chaitanya, we are now introducing it in the Western countries. This festival is being observed simultaneously in San Francisco, London, Buffalo, Melbourne, Tokyo and many other cities. Taking part in these festivals means taking a step forward in the path of self-realization. rathe ca vamanam dhrstva punar janma na vidyate. Simply by seeing the Lord on the chariot, one makes advancement in spiritual life and can stop the repetition of birth and death.

Thank you very much.