Invincible is the one who is too powerful to overcome. Lord Rāma, being the Supreme Personality of Godhead, possessed invincible prowess. The entire Rāmayana is proof of the invincible feats accomplished by Lord Rāma.
Let us go through one of the earliest feats of Lord Rāma which displays His invincible prowess.

Once the mystic sage Viśvāmitra visited Ayodhyā and instructed the gatekeepers, “Tell the king that Viśvāmitra, the son of Gādhi, is at his door.” Daśaratha quickly went with his ministers to greet the sage, respectfully brought him in, sat him down and personally washed his feet. Standing with folded palms before the sage, Daśaratha, respectfully inquired, “What can I do for you today?”
The sage explained how he was impeded, in his attempts, to perform a sacrifice. Whenever the sacrifice was close to its completion, the rakshasas Maricha and Subāhu would appear overhead and drop-down volumes of flesh and blood, ruining it completely.

Viśvāmitra, himself capable of killing those rakshasas with his powerful spells, chose not to do so, as it was the duty of the Kshatriyas. The sage was well aware of Prince Rāma to be the Supreme Lord Himself. Hence, he ordered the King Dasharatha, the undisputed ruler of the world, to send Rāma and Lakṣmana along with him to stand as the protectors of his sacrifice.

After receiving the blessings of their father, Princes Rāma and Lakṣmana set out with the sage to his hermitage. As they walked, the brothers suddenly stopped at the edge of a forest which bore a desolate look, with trees bared of leaves. The princes looked around in disbelief. The forest ahead was enveloped by darkness and awful sounds emanated, from it. Lord Rāma curiously asked Viśvāmitra, “O sage! What is this dreadful nature of the forest ahead, it appears inaccessible and foreboding.”

The holy sage replied that once Indra had founded these flourishing cities but due to a Yaksha woman, Tataka, they had turned into a desolate forest, by her malicious presence. Fearsome and filled with malice towards all beings, she attacked anyone who approached the area.

The sage wanted the end of the evil Tataka who mastered mystical powers and was as powerful as a thousand elephants. 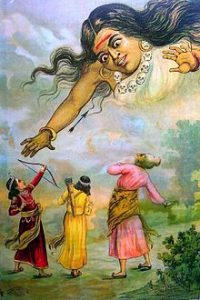 On receiving such a command, Prince Rāma hesitated for a moment, for he was asked to kill a woman. Viśvāmitra encouraged the invincible Rāma that Tataka was not an ordinary woman, but an evil demoness and hence, He need not dither to kill her.

Prince Rāma accepted the sage’s order and grasped his bow. He then twanged his bowstring, which produced a rumbling sound and all of the forest animals were scared by the noise, Tataka herself was stunned. Overwhelmed with anger, she emerged from the cave, swearing, “Who dares to challenge me? He will soon regret his foolishness.” Uttering those words, she ran towards the source of the sound.
Noting the evil Tataka at a distance emerging from the forest in a fury, Rāma told Lakshmana, “Behold Lakshmana, the very sight of this Yakṣa woman can break the heart of timid.”

As Prince Rāma spoke, Tataka rushed towards him roaring with her arms upraised. Creating a swirling cloud of dust, Tataka confounded the brothers and then vanished. Using mystical powers, she employed numerous conjuring tricks. She assumed many forms, one after another, sometimes appeared in front of them and again suddenly appeared behind them. One moment, she appeared as a furious horned animal and in the next, she became an abysmal looking fiend. Howling horrendously she swooped down upon them as a giant clawed bird and hurled upon them huge rocks.

Rāma shot arrows with blinding speed. Shooting razor-headed arrows He severed Tataka’s two arms. Still, undeterred Tataka came running towards him. Enraged Lakṣmana fired some sharp arrows, precisely slicing off her nose and ears.
She instantly disappeared and rose up to the sky. Although deprived of her arms, she used her sorcery to throw down massive trees and boulders. Remaining invisible, she moved hither and thither, screeching all the while.

Viśvāmitra witnessed as the boys got tricked by the Rakshasi’s sorcery. He realized they were holding back because Tataka was a woman. The sage explained again that the sinful and wicked woman, Tataka shouldn’t be spared. She thoroughly deserved death at their hands.

Invincible Rāma then showed His skill at archery. Using his shabda- bheḍī vidyā, he released arrows capable of striking an invisible target by seeking out its sound.
Rāma soon covered Tataka in a network of arrows which reduced the falling stones to dust. Prince Rāma, with his arrows, pierced the Rakhsasi and she screamed in pain. She quickly brought herself back to land again and assumed a vast form. Tataka furiously rushed, like a storm towards the brothers.
Invincible Rāma quickly fired an arrow imbued with the energy of a thunderbolt. It hit the Rakhsasi in the chest. Her heart was ripped apart, with a hideous cry, she fell dead.

Having watched invincible Rāma slay the demoness, the gods assembled in the skies and applauded, to which Rāma and Lakṣmana humbly bowed their heads. Viśvāmitra was impressed. Tataka was dead, the turn of Maricha and Subāhu had come. They marched on towards the hermitage of the holy sage.