Lord Rāma, the purest and eternal, was born to purify the planet. He sanctified the existence by eradicating those evil and awarding redemption to those worthy. Redemption, salvation from sin, can be earned only through the mercy of the lord along with the great effort of penance. This is the ultimate purpose of life to facilitate the return of the conditioned souls back home, back to Godhead.​

Once the creator, Lord Brahmā, with his great effort and prowess of creativity crafted a lady possessing flawless beauty. He named her Ahalyā. Her beauty crushed the pride of Urvashi, the leading celestial fairy.

As she grew to her adulthood, Brahmā declared that the first being to travel around the three worlds would win Ahalyā. Lord Indra, the king of heaven, who desired to acquire all the beautiful things in the world, had his eyes set on Ahalyā. He used his magical powers and completed the challenge, thereby demanding the hand of Ahalyā.

Nārada, the son of Brahmā, was watching the contest very closely told his Father that Gautama, the one among the Saptarishis, completed the task before Indra did.

He explained that Gautama circumambulated the wish-bearing cow Surabhi while she gave birth. As a part of his daily ritual offering following the Vedas, He made the cow equal to the three worlds. Thus Gautama was the legitimate winner to which Brahmā agreed.

Ahalyā was then married to much older Gautama. Indra remained envious and furious. Ahalyā then settled into Gautama’s hermitage which was in a forest named Mithila-upavana, near Mithilā. There the couple practiced asceticism together for several years.

According to the Bala Kāṇḍa of the Rāmāyaṇa, once, when the holy sage, Gautama had left for his daily rituals, Indra visited his hermitage disguised as Gautama himself. Enamoured by Ahalyā’s beauty, Indra praised her lustfully and desired to enjoy carnal pleasure with her. Although she saw through his disguise, she consented his plea, owing to her curiosity. Thus Lord Indra accomplished his long sought after a desire to enjoy Ahalyā.

At that very moment, Gautama, returned to his hermitage, having learned of Indra’s deception through his supernatural powers. 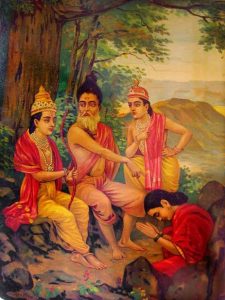 Upon reaching his hermitage, Gautama spotted Indra, indulging with Ahalyā. Seeing this, Gautama immediately cursed him, saying, “You are so fond of the vagina that I curse you that you get vaginae all over your body.”

Terrified of such an appearance, Indra began to cry, “It will be very much abominable for me.”

Gautama witnessed Indra’s pitiful cries and offered, “These vaginae may be turned into eyes.” Therefore his body is full of eyes, Śata-cakṣuṁṣi.

Gautama then turned to his wife, the beautiful Ahalyā. He cursed her, saying, “May you remain invisible to all beings, feed only on-air, sleep in ashes. Thus you will atone for your sin. But rejoice for the fact, that your redemption will be bestowed by the Supreme, Lord Nārāyaṇa Himself when He will descend on this planet as Lord Rāma.”

Gautama thereafter abandoned the hermitage and went to the Himalayas to practice austerity.

Thousands of years had passed. Ahalyā performed her penance adherently and awaited the auspicious day when the supreme himself as Lord Rāma would appear and bestow redemption upon her.

Finally, the day had come. Lord Rāma, after killing Tataka reached Vishvamitra’s hermitage to help him complete his sacrifice. Vishvamitra then performed his sacrifice in the presence of Rāma. The two rakshasas Maricha and Subāhu appeared again, but Rāma killed Subāhu while Maricha narrowly escaped death deeply wounded. At last, Sage Vishwamitra completed his sacrifice successfully.

Then, the sage Vishvamitra decided to proceed to Mithilā for performing some austerities for the King Janaka. As he marched towards Mithilā along with Rāma and his brother Lakshmana, they reached the Mithila-upavana, wherein lay the hermitage of sage Gautama. The sage Vishvamitra then recounted the unfortunate tale of Ahalyā who was serving her curse, lying like a stone and waiting for her redemption to Lord Rāma. He then ordered Lord Rāma to redeem Ahalyā from her suffering.

Following Vishvamitra’s instructions, the brothers entered the ashram to redeem Ahalyā. Rāma considering Ahalyā pure and unblemished gave her obeisance by touching her with his lotus feet, an act that bestowed redemption upon her.

She greeted them, recalling Gautama’s words that Lord Rāma would be her redeemer. Ahalyā extended her warmest reception, washing their feet and making an offering of forest fruits. The devatās and celestial beings showered Lord Rāma and Ahalyā with flowers and bowed to Ahalyā, who had been purified through her penance.

After the event, Rāma, Lakshmana, and the holy sage Vishvamitra, marched towards the palace of King Janaka. Soon Gautama, one among the seven great sages, learning of the redemption of his devoted wife Ahalyā, returned to his hermitage.