Read about the Ratha Yatra at ISKCON centres and how the festival is intimately linked to the history of Hare Krishna Movement. Major cities around the world celebrate Ratha-yatra. It is a contribution of Srila Prabhupada, the founder-acharya of ISKCON, who introduced a life of Krishna consciousness in the western world. Srila Prabhupada had a great ambition to celebrate this festival gorgeously in every city of the world and he inspired and guided his disciples to make this annual festival well-known in every part of the world. The first-ever Ratha-yatra in the western world was organized in San Francisco on July 9, 1967. Thereafter, this festival became popular and spread to many other countries. By 1975 the festival had become so popular that the mayor of San Francisco issued a formal proclamation of celebrating Ratha-yatra Day in San Francisco.

For Srila Prabhupada, the idea of conducting Ratha-yatra was not new. He would worship Lord Jagannatha during his childhood. When he was six years old, his father arranged for a small ratha and young Abhay (who later came to be known as Srila Prabhupada) would perform Ratha-yatra in his neighbourhood and distribute prasadam to all the children taking part in the festival. Thus, from the very beginning of his life, Srila Prabhupada used to conduct Ratha-yatra. What once had been a childhood activity later became a world-wide celebration as Srila Prabhupada vigorously preached across the world. 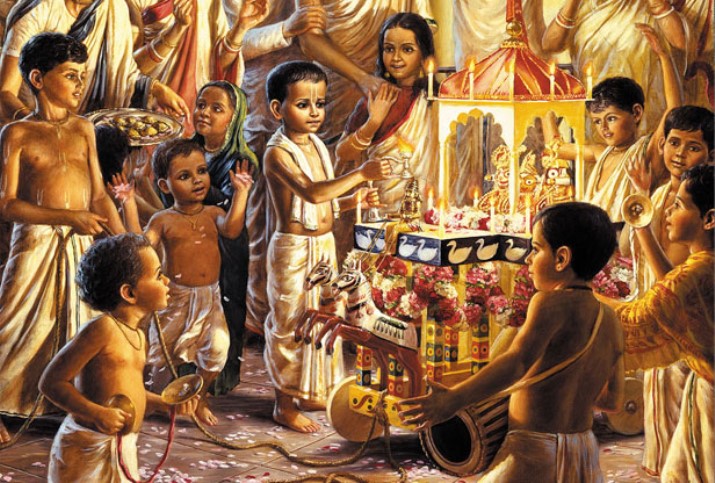 It is quite interesting to study the intimate connection of this blissful annual festival of Ratha-yatra with the history of Hare Krishna Movement. When Srila Bhaktivinoda Thakura, the father of Srila Bhaktisiddhanta Saraswati Thakura, was serving as the district magistrate, he was in-charge of the Puri Jagannatha temple. During one of the Ratha-yatra processions in Puri, when the cart was passing before Srila Bhaktivinoda’s house, it stopped there. At that time, Srila Bhaktisiddhanta Saraswati Thakura who was an infant then, was taken by his mother to the ratha and placed before Lord Jagannatha. Miraculously, one of the garlands of the Lord fell on the child, indicating the Lord’s blessings and it was the first sign of the child becoming an acharya. Lord Chaitanya Mahaprabhu, the initiator of the congregational chanting of the holy names of the Lord, resided in Jagannatha Puri during the final years of His pastimes on earth. There the Lord would take part in the Ratha-yatra every year and chant the holy names and dance in ecstasy. He exhibited the highest devotional mood of Radharani – the feelings of separation from the Lord. This was a wonderful occasion for His disciples and other devotees to experience the divine association of the Lord and enhance their devotional feelings during the festival.

Regarding the significance of this Ratha-yatra, Srila Prabhupada explains that once on an auspicious day, Lord Krishna started from Dwaraka and visited Kurukshetra with His elder brother Balarama and younger sister Subhadra on a chariot. Having received the news of Lord Krishna’s visit, the gopis and other inhabitants of Vrindavana came there to meet Him. Looking at Krishna in a royal dress, Srimati Radharani implored Him to come to Vrindavana, where they had spent their early days, performing pastimes in the forests. In commemoration of this grand visit of the Lord with His family, devotees pull a ratha carrying Lord Jagannatha, Baladeva and Subhadra Devi. 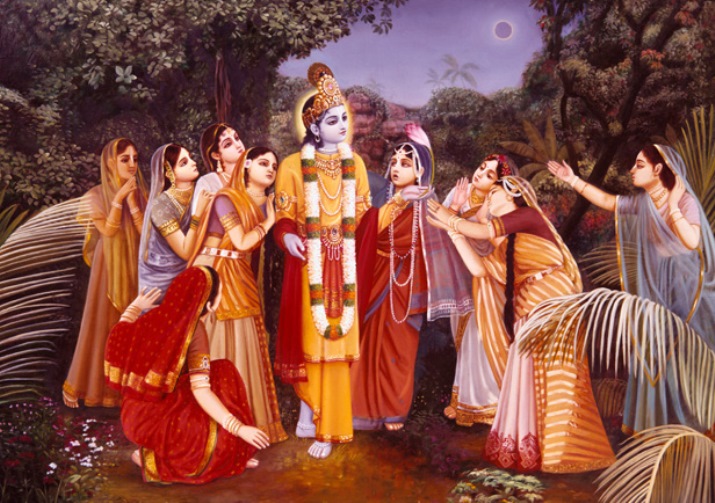 Thus following the footsteps of Lord Chaitanya, Srila Prabhupada introduced Ratha-yatra and now it is a part of this Hare Krishna Movement. It plays an important role in bringing together all the devotees of Krishna. Ratha-yatra gives an opportunity to all including non-devotees to serve the Lord at least for one day, by remembering Him, chanting His holy names, dancing and honouring Krishna prasadam while the Lord takes a pleasure ride and blesses all on the way. Those who build a ratha and make other preparations of this festival indeed serve the Lord by engaging their energy and whatever possessions and talents they have in His service. This service attitude and devotional service purifies one’s materially contaminated heart and thus helps one make progress in developing attachment for Krishna which is dormant in the heart.

Srila Prabhupada showed that no other material endeavours to achieve unity among the people of the world would be as effective as the festival of carts. Spiritual activities like Ratha-yatra would do a lot in creating unity by bringing all under the shelter of Lord Jagannatha. Regarding this, Srila Prabhupada said in a lecture, “We cannot become united nations of united dogs (laughter). It is not possible. Everyone is barking. And if you practice to bark, then simply some different types of dog, some bulldogs, some greyhounds, some this, some that (laughter). So how they will be united? No. That is not possible. Here is unity, when you accept Jagannatha. There is unity. So actually, if we take Krishna consciousness movement very seriously, scientifically, then there is unity.” The Ratha-yatra festival is a mass movement for enlightening people about the Krishna consciousness movement. To take part in these festivals is a step forward towards self-realization. To support this, Srila Prabhupada quotes a verse, “rathe ca vamanam drstva punar janma na vidyate – simply by seeing the Lord on the chariot, one makes advancement for stopping the repetition of birth and death.” Once, a devotee asked Srila Prabhupada whether anyone who took part in Ratha-yatra would be liberated. Srila Prabhupada answered affirmatively but indicated that only if one took it seriously and did not come to maya again. He said that it should not become a hasti-snana; an elephant takes a thorough bath in a river but as soon as he comes on the bank of the river, he takes dust and throws it over his body again.

Srila Prabhupada, in a lecture on a Ratha-yatra day in San Francisco, minutely described the significance of the names – Jagannatha, Balarama and Subhadra. He explains that jagat means the moving world; gacchati iti jagat – gacchati means that which is moving. Everything in this world – planets, sun, even this universe is moving. Not only animate things like the living entities, but also inanimate things like a machine are moving under the control of some animate object. Some of the animate objects like trees are standstill but ultimately they are also moving in this sense that one species of life is being transmigrated to another species of life. Therefore it is called jagat which means moving. And jagat-natha; natha means the proprietor or the master. So Jagannatha means the proprietor or the master of all these movements. And Balabhadra or Balarama – bala means strength and rama means enjoyment. So Balarama is the one who gives you spiritual strength for enjoying eternal blissful life. And Subhadra – su means auspicious and bhadra means well-being. Having explained the meaning, Srila Prabhupada said that Subhadra, Jagannatha and Balarama combined together were present there to reclaim all the devotees from their miserable condition of life. 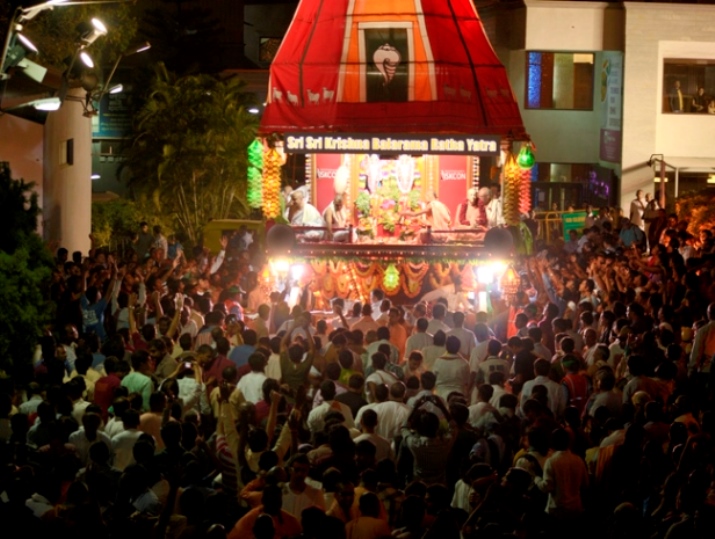 ISKCON Bangalore organizes the Ratha-yatra of Krishna Balarama every year. We invite you all to participate in the celebrations.