Why Go to Vaikuntha? “Everybody wants to go to heaven

But nobody wants to die …”  says Albert King in one of his famous songs.

Have you ever wondered why? Heaven is synonymous with happiness and enjoyment. But, are we prepared to die to go to heaven? Death is such a mysterious journey of which the destination is known to none. We are all scared of death. No one is prepared to meet this unknown destination, which holds the greatest unsurmountable fear in our consciousness. But the certainty of this destination is well known, as the saying goes, ‘as sure as death’.

The concept of heaven is of a place of permanence and eternal bliss in contrast to the material world, that is temporary and full of miseries.

In the Bhagavad Gita, Lord Krishna Himself describes this world as duḥkhālayam aśāśvatam [Bg. 8.15], a temporary place of misery. This is true for all, beginning from Lord Brahma down to an insignificant ant.

In the days gone by, a common punishment awarded to a criminal was that he is dunked in the water till he desperately gasps for air and when he is almost going to die, he is taken out of water. Those few moments when he is apparently free to breathe fresh air, gives him great relief, only to be dunked back in the water soon after. Thus the so-called happiness of material world too is akin to the time gap between the two dunks into the water.

However, Lord Krishna informs us in Bhagavad Gita (8.20)

There is another realm, eternal and transcendental – that is Vaikuntha, devoid of anxiety.

Seven-fold miseries of the material world 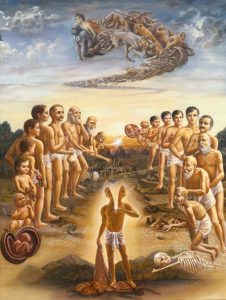 Every living being in the world has to undergo four kinds of sufferings – birth, death, old age and disease.

We don’t want to get diseased, but, despite all our medical advancements, we are still unable to find a cure for all diseases.

We never want to grow old, but, despite the use of all those costly cosmetics promising to keep us young, old age hits us anyway.

We don’t want to die, but death comes. 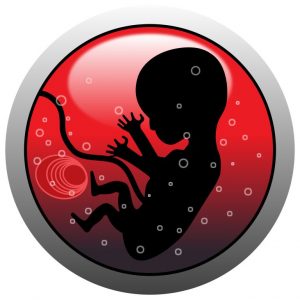 Of course. Srimad Bhagavatam gives us a vivid description of how miserable the process of birth is. Imagine how terrible it would be for you to be tightly packed in a gunny bag, surrounded by worms that bite you constantly. The food and water are passed to you through a pipe and you are in this situation for nine long months. This is our situation in the mother’s womb. At the time of delivery, you have to pass through a narrow passage, with the risk of being suffocated or becoming handicapped for the rest of your life.

To perceive the four aspects of our existence janma: birth, mrtyu: death, jara: old age, and vyadhi: disease as the miseries, is a sign of true knowledge.

Apart from these four-fold miseries, we are also afflicted with three more kinds of klesas/ difficulties throughout our life.

Adhibhautika klesa– Miseries caused by other living entities. The world history’s greatest conqueror, Alexander-The Great, too was conquered by an insignificant mosquito and died of malaria. We are no exception.

Adhidaivika klesa- Miseries inflicted upon us by natural disturbances like earthquakes, famines, droughts, floods, epidemics, and so on. I may be the richest person living in a skyscraper building but when an earthquake hits, I will not be left with even 10 sq. feet of land.

Adhyatmika klesa– Miseries caused by our own body and mind. Even if we somehow escape from the other two, we will be troubled by our own mind with stress, anxiety, depression, etc.

The body is the source of misery

The root cause of all our suffering is our body. We have a material body which is subject to the laws of material nature. The Vedic literature gives us the knowledge that we are not these bodies but we are spirit souls. As long as the spirit soul is entrapped within the cage of this body, he is forced to experience all kinds of material miseries. The spirit soul has the qualities of the Supreme, who is sat, chit and ananda – eternal, full of knowledge and bliss. So we, being the spirit souls, are never happy by attaining any form of material happiness.

A life of eternity, knowledge and bliss

The only permanent solution is to go to Vaikuntha where there are no anxieties, no birth, no death, no old age, no disease, and no sufferings. As Lord Krishna in Bhagavad Gita (8.16) declares that:

“From the highest planet in the material world down to the lowest, all are places of misery wherein repeated birth and death take place. But one who attains My abode (Vaikuntha), never takes birth again in this miserable world.”

The human life is an opportunity to get free from all kinds of miseries by developing spiritual consciousness and leading our life in such a way that we don’t have to accept another material body to undergo miseries in the next life. After quitting this body, we get a spiritual body where we shall be able to live an eternal blissful life in association with the Supreme Lord in Vaikuntha, the home of all souls.

When we know what Vaikuntha is and how to reach there after death, the statement

“Everybody wants to go to heaven

But nobody wants to die …” will no longer be true.

But is Vaikuntha the same as the ‘heaven’, or more popularly called in common Indian circles as Svarga? Let us find out in our next article.