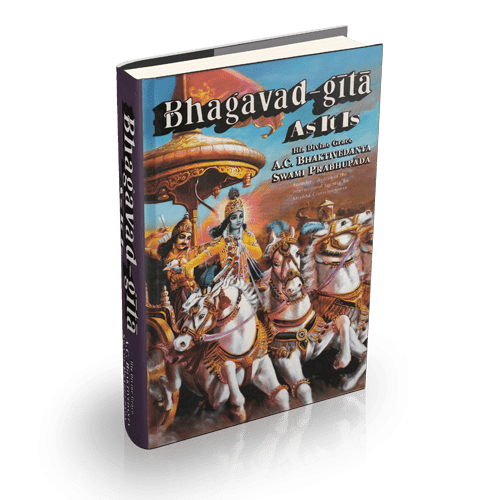 The Bhagavad Gita, an ancient sacred text of India is regarded universally as the prime source of spiritual knowledge and inspiration for the humankind. Spoken directly by Lord Sri Krishna to His intimate friend Arjuna, the Bhagavad Gita’s seven hundred verses provide a definitive guide to the science of self-realization. No other book reveals, in such a lucid and profound way, truths like the Bhagavad Gita does. The Bhagavad Gita which is also known as the Divine Song is unique in many ways. 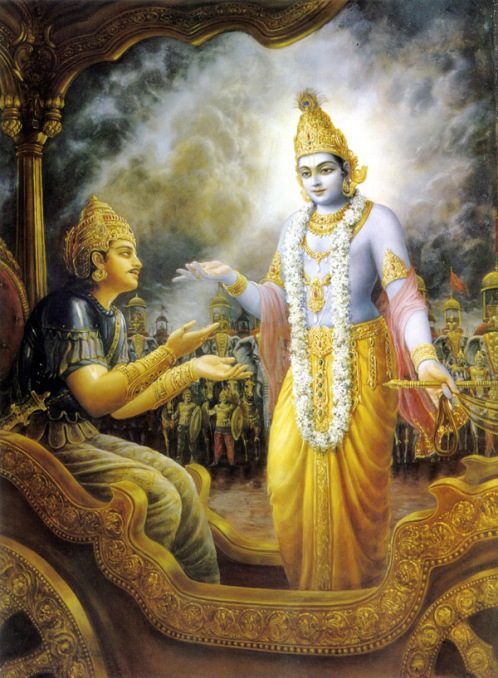 There is a common misconception among many people that Bhagavad Gita and Mahabharata belong to only those practicing the Hindu religion. The messages contained in the Bhagavad Gita are universally applicable to all, irrespective of their country or religion. It is not a religious scripture pertaining to a certain section of society. Bhagavad Gita teaches us the right way to lead our life. The very purpose of Bhagavad Gita is to deliver mankind from the sufferings of this world. Every man is in difficulty in so many ways, as Arjuna was in, having to fight the Battle of Kurukshetra.

Which Version of Bhagavad Gita?

A persistent question prevails throughout the ages – As there are hundreds of different editions of Bhagavad Gita, which among them presents the true message of Lord Sri Krishna?

While Bhagavad Gita was originally presented in Sanskrit, till now many scholars have taken the liberty to translate it in various languages, but sadly, none could match the real perspective of the Bhagavad Gita, the crown jewel of humanity’s spiritual wisdom. Only those versions of a translated piece are best to be read, which are faithful to the original intent of the author.

For instance, when we are sick, and go to a medical store, and ask for medicine, we cannot make a choice of the medicine based on our preference of color, taste or smell. Although the medical store contains an array of different medicines, we have to take only the medicine prescribed by the physician for our disease. Further, we should consume the medicine according to the directions given on the label. Similarly, Bhagavad Gita should be accepted as it is, directed by the speaker Himself. The speaker of Bhagavad Gita is Lord Krishna, who gives the process of understanding the Gita as follows:

TRANSLATION: The Blessed Lord said: I instructed this imperishable science of yoga to the sun-god, Vivasvān, and Vivasvān instructed it to Manu, the father of mankind, and Manu in turn instructed it to Ikṣvāku. This supreme science was thus received through the chain of disciplic succession, and the saintly kings understood it in that way. But in course of time the succession was broken, and therefore the science as it is appears to be lost. That very ancient science of the relationship with the Supreme is today told by Me to you because you are My devotee as well as My friend; therefore you can understand the transcendental mystery of this science.
(Bhagavad Gita 4.1-3)

The mundane politician, philosopher, poet or scientist is not equipped to comment on the Bhagavad Gita, because he has no knowledge of Lord Krishna from the authorized disciplic succession (parampara). Such a person is not a devotee and has no regard for Lord Krishna as the Supreme Personality of Godhead. Thus the so-called scholar portrays Him as an ordinary person and misleads the reader with his own interpretations of the Bhagavad Gita. So to convey the real insight of the Lord, Srila Prabhupada (who comes in the authorized disciplic succession originating from Lord Krishna Himself), took the task on his own hands and translated Bhagavad Gita. Unlike most other editions of the Gita, Srila Prabhupada presented “Bhagavad Gita As It Is” without the slightest adulteration. Thus one should only prefer “Bhagavad Gita As It Is” over others. 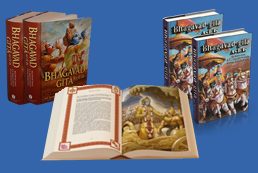 Why “Bhagavad Gita As It Is”? Let’s decode it with a simple ‘demand-supply theory’. The more the demand, the more is the supply. The version of Bhagavad Gita by A.C. Bhaktivedanta Swami Prabhupada, is by far the most widely distributed of all English Bhagavad Gita translations. Its publisher, the Bhaktivedanta Book Trust, estimates sales at more than twenty-three million (230 Lakhs) copies, a figure which includes the original English edition and secondary translations into fifty-six other languages. Are you one among 23 million? Buy Now

What does Bhagavad Gita contain?

Five thousand years ago the theological science of Bhagavad Gita was spoken by Lord Krishna, the Supreme Personality of Godhead to His disciple Arjuna. It stands supreme in its doctrines as the principles of religion were enunciated by God Himself.

There are five main themes illustrated in the Bhagavad Gita. 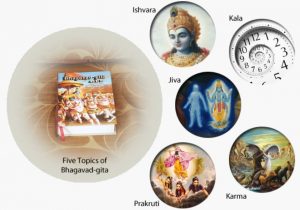 Get a summarized understanding of these Five Topics of Bhagavad Gita.

The Spiritual Revolution by Bhagavad Gita

The Bhagavad Gita has ignited a spiritual revolution for thousands of years which is still burning. Many noted spiritual icons and scholars including Shankaracharya, Ramanuja, Madhvacharya, Bhaskara and Abhinavagupta wrote their own commentaries on Bhagavad Gita. Other modern writers such as Jeaneane Fowler, Ithamar Theodor, and Robert Zaehner have also shared their own versions.

Tulsi Gabbard, United States Representative: The Bhagavad Gita is the “perfect textbook” for those who are striving to be “servant leaders” and its message is relevant for all days and ages. “(It) is as relevant today as it has always been and as it always will be… regardless of your age, where you come from, what language you speak, what gender…I have gradually been able to understand my true identity … Who I really am, my spiritual essence, my purpose in life…”

Robert Oppenheimer, American physicist, and director of the infamous Manhattan Project read the Bhagavad Gita in the original form, citing it as one of the most influential books to shape his philosophy of life. Oppenheimer later recalled that, while witnessing the explosion of the Trinity nuclear test, he thought of verses from the Bhagavad Gita, ‘If the radiance of a thousand suns were to burst at once into the sky that would be like the splendor of the mighty one.’

Ralph Waldo Emerson, American Essayist, Lecturer, and Poet said: “I owed a magnificent day to the Bhagavad Gita. It was the first of books; it was as if an empire spoke to us, nothing small or unworthy, but large, serene, consistent, the voice of an old intelligence which in another age and climate had pondered and thus disposed of the same questions which exercise us.”

ISKCON Bangalore suggests you not to go by the words alone of any great personalities, instead try it for yourself. Experience the nectar milked, ready to be fed, directly by the Lord Himself. As in the 18.66 verse of Bhagavad Gita, Lord Krishna states, “Give up all varieties of religiousness, and just surrender unto me; and in return I shall protect you from all sinful reactions. Therefore, you have nothing to fear.” The Bhagavad Gita needs to be read to get the true essence of human life. But the real question is, Will you? Buy now.