Cow is our Mother. Bull is our Father.

We take the importance of cow and bull in our life for granted. It is our duty to protect animals – especially cows and bulls.

Recently someone raised a question in the media:

If the cow is your mother, is the bull your father?

There was serious outrage and some people confronted it by raising a funny question: If the priest in the church is addressed as father, does that mean he is the husband of your mother?

Fun apart, we say that there is nothing wrong in that statement.

Cow is our mother and bull is our father.

We drink the milk of the cow; therefore, she is our mother. The bull produces grains for our maintenance; therefore he is our father. Killing the cows and bulls is like killing one’s own mother and father. Therefore, a civilized man is expected to protect these animals.

According to Śrīmad-Bhāgavatam, persecution of cows and bulls is a symptom of Kali. 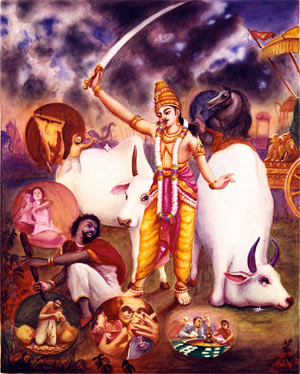 The age of Kali started with the disappearance of Lord Krishna from the mortal world. Mahārāja Parīkṣhit, the grandson of the Pāṇḍavas, who was entrusted with the responsibility of ruling the kingdom, wanted to curb the irreligious practices that had infiltrated the society due to the influence of Kali.

Seated on a chariot drawn by black horses, Mahārāja Parīkṣhit, whose flag was marked with the sign of a lion, left his capital city of Hastināpura, to conquer all the directions.

On the way, he saw a black man dressed in royal robes, trying to hurt a cow and a bull. The king became angry and with a deep voice, sounding like thunder, he chastised the black man and took out his sword to kill him.

The black man, artificially dressed in royal robes, was none other than the personality of Kali, who is the cause of all irreligious activities. Those who are under the evil influence of Kali always try to hurt the cows and bulls. It is the responsibility of the administrative head of the state to stop such heinous activities and protect these poor animals.

It is inhuman. The administrative head of the state must stop this. Article 48 of the Indian Constitution prohibits the slaughtering of cows and calves; so, it is not very difficult to ban such slaughter.

The State shall endeavor to organize agriculture and animal husbandry on modern and scientific lines and shall, in particular, take steps for preserving and improving the breeds, and prohibiting the slaughter of cows and calves and other milch and draught cattle.

But, still there is no one to protect these gentle and peaceful animals.

Stop this cruelty. Stop slaughtering cows and bulls. Do not become a victim of Kali.

If we still do not change our attitude towards these animals then, there will be catastrophe, waiting.

Previous PostVeggie Meat is fast becoming a new food trend Next PostWhat can a change in our consciousness do? 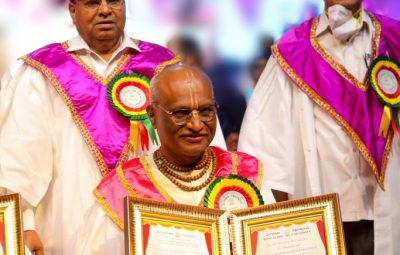 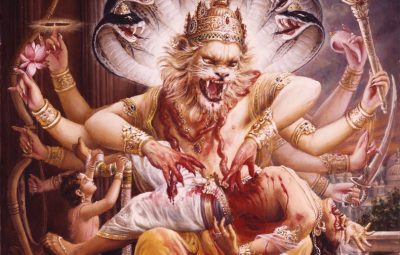