In ancient times there were two brothers named Hiranyakashipu and Hiranyaksha. They were demons born to sage Kashyapa Muni. They flaunted uncommon bodily features and had steel-like frames which grew just like mountains. Their bodies became so tall they seemed to kiss the sky with the crests of their golden crowns. They blocked the view in all directions, and while walking shook the earth with their every step.

The younger demon, Hiranyaksha, was a greedy exploiter of gold. He exploited enough gold from the earth so as to cause it to spin out of orbit. It then fell into the ocean. 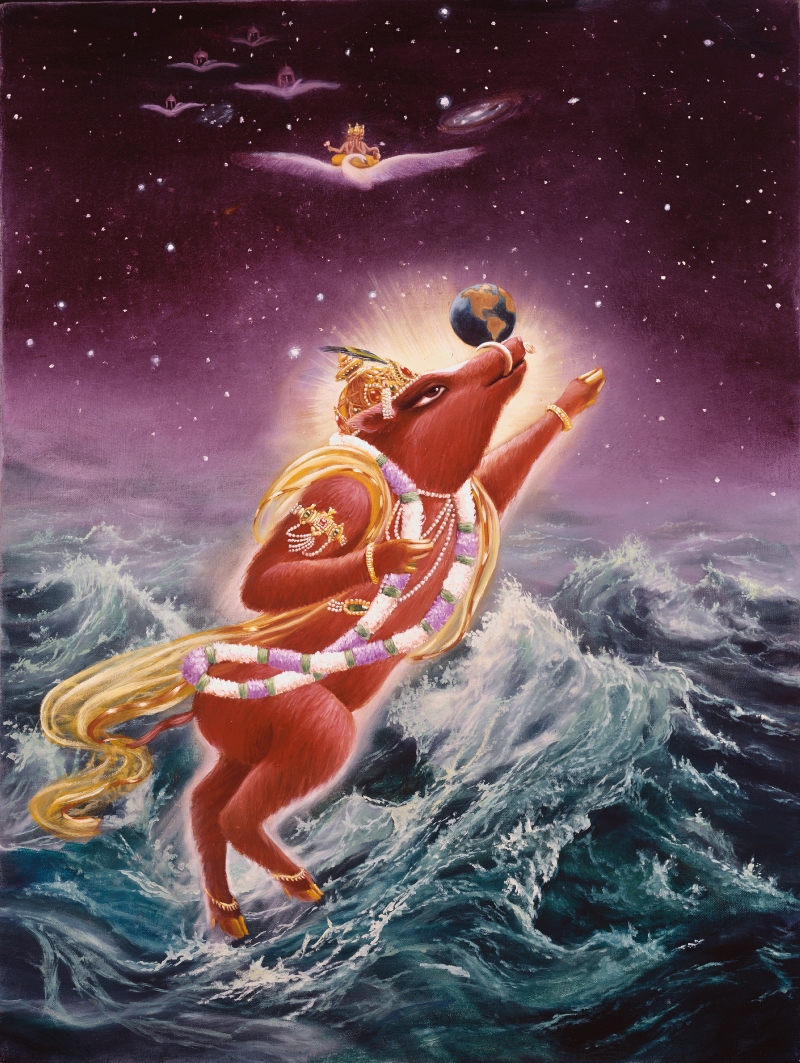 Lord Brahma who was the creator of the Universe was thinking of how to lift the earth which was submerged in water. At this time, the small form of a boar came out of his nostril. The measurement of the creature was not more than the upper portion of a thumb. While Brahma was looking at it, that boar became situated in the sky like a gigantic elephant. Then the boar roared like a rolling mountain. Brahma and the other demigods who saw this came to know that he was an incarnation of Lord Krishna and offered their prayers.

Playing like an elephant, Lord Varaha (the boar) flew in the sky, slashing his tail, his hard hairs quivering. He scattered the clouds in the sky with his hooves and glittering white tusks. As Lord Krishna had assumed the form of a boar He searched for the earth by smell. Diving into the water like a giant mountain, He split the ocean into two huge waves. Lord Varaha penetrated the water with His hooves, sharp like arrows. There he saw the earth, the resting place for all living beings, lying as it was in the beginning of creation. Then He easily took the earth on His tusks and lifted it out of the water. With His anger glowing like molten coals, Lord Varaha then accosted the demon Hiranyaksha.

Thereupon Lord Varaha killed the demon within the water, just as a lion kills an elephant. The cheeks and tongue of the Lord became smeared with the blood of the demon, just as an elephant becomes reddish from digging in the purple earth.

In this manner the Personality of Godhead, Lord Krishna the maintainer of all living entities, raised the earth from within the water, and having placed it afloat on the water, He returned to His own abode.