Every individual must possess the quality of being grateful. The act of feeling or showing an appreciation for something done or received makes one a better individual.

Lord Rāma irrespective of his situation, either as a prince or an exiled man, was ever grateful to every individual he came across. The epic of Rāmāyaṇa narrates a heart-warming tale of Jaṭāyu and the ever grateful Rāma.

The trio on their journey to Panchavati came across a giant vulture lying in a clearing. Rāma and Lakṣman, assuming it to be a Rākṣasa, hastily prepared themselves for a fight. Lord Rāma carefully approached the vulture and asked who he was. In a gentle speech, the bird replied that he was an old friend of Daśaratha. He was Jaṭāyu, the nephew of Garuòa, the invincible eagle carrier of Viṣṇu.

Jaṭāyu warned Rāma about the Rākṣasas and then offered his service to protect Sītā when they went out to gather food. Lord Rāma, gratefully embraced the great bird and they continued toward Panchavati.

At Panchavati, they settled in the dwelling and lived peacefully, bathing in the Godāvarī and enjoying the sights and sounds of the forest.

After Lord Rāma demolished all of the demon armies, Śūrpaṇakhā escaped to her brother, Rāvaṇa and fell at his feet, wailing piteously. Śūrpaṇakhā displayed her disfigured face and harshly narrated her story. Hearing such a searing rebuke enraged Rāvaṇa who shook with anger and rose up quickly from his golden throne. She described to him, Rāma’s annihilation of the Rākṣasas.

Rāvaṇa was angered, by Rāma’s annihilation of the Rākṣasas but for the mutilation of his sister, He took it personally.

Śūrpaṇakhā longed for revenge. Sītā was the cause of her mutilation. The Rākṣasī wanted the princess to be taken from Rāma so that both Rāma and Sītā would feel intolerable pain.

Śūrpaṇakhā knew that her brother was lusty. He had no regard for moral laws and took pleasure in enjoying other’s wives.

The Rākṣasī described Sītā, “Her dark eyes and hair contrast vividly with the hue and lustre of Her body, which resembles molten gold. Her breasts, hips and thighs are exquisitely shaped, and She shines like the Goddess Lakṣmī. Her countenance is like a full moon. Her thin waist and delicate limbs are beyond compare. I have seen no woman like Her on the earth, be she a Goddess, Gandharva or Yakña. Any man embraced with delight by Sītā will enjoy happiness greater than that of Indra. Without a doubt that peerless female, who is of a gentle disposition, would be a worthy consort for you.”

Rāvaṇa’s mind was captivated by the description which his sister presented. He considered how he might win her. Arrogantly he assumed that She would be attracted to him, the great and powerful king of the Rākṣasas.

Rāvaṇa had made up his mind. He at once flew to Maricha asking him an assist in Sītā’s abduction.

Rāvaṇa transformed himself into a human ascetic, wearing matted locks and simple dress, he waited in the woods near Lord Rāma’s hermitage. Meanwhile, Maricha used mystical powers to assume the form of an enchanting deer. Nibbling at leaves here and there, he went into the region of Rāma’s hermitage. Sītā was outside the hut plucking flowers. She immediately saw the wonderful-looking deer. Sītā, due to Her womanly nature, became captivated by the deer. She then requested Lord Rāma to capture it.

As soon as Maricha had taken Lord Rāma to a distance, Rāma recognizing the deer to be a Rākṣasa shot an arrow and killed him. Maricha further used his magical powers to allure Lakṣman, imitating Rāma’s voice, the Rākṣasa cried out in distress.

When Lakṣman and Sītā heard the cry, anxious and angry Sītā thrash-talked and insulted Lakshmana ordering Him to, immediately find Rāma. As soon as Lakṣman had gone, Rāvaṇa came out of hiding, to abduct the unprotected Sītā. In a human form, he approached Sītā, and as he gazed at Her, the demon was pierced, by Cupid’s arrow.

Rāvaṇa took Sītā in his arms, scolding Her sharply, and he placed her in the chariot. As the chariot rose up, Sītā called for Rāma at the top of her voice.

Jaṭāyu heard Sītā’s cry and looked up. He saw the chariot with Rāvaṇa and Sītā on board. From the tree, he called out to the Rākṣasa, whom he immediately recognized.

Jaṭāyu was infuriated. He challenged Rāvaṇa. When Rāvaṇa heard Jaṭāyu’s challenge, he veered his chariot toward him and rushed angrily at the king of birds, raining him with blows from his twenty arms. Jaṭāyu assailed Rāvaṇa with his sharp talons. As the great bird screamed, Rāvaṇa roared. 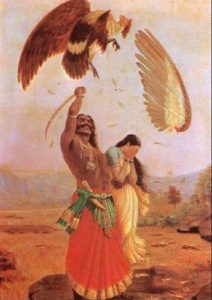 Jaṭāyu ignoring his wounds, bravely fought Rāvaṇa. He broke Rāvaṇa’s large jewel-encrusted bow and then tore off the heads of Rāvaṇa’s mules. With a blow from his bill, he killed the charioteer. Jaṭāyu then smashed Rāvaṇa’s chariot. As the chariot fell in pieces, the Rākṣasa grabbed hold of Sītā and dropped to the ground.

Jaṭāyu then tore-off Rāvaṇa’s ten left arms which immediately regenerated back. Tormented by Jaṭāyu, the Rākṣasa darted toward him, taking a razor-sharp sword, he lopped off Jaṭāyu’s wings. The great vulture, fell on the ground, dying. With his white breast reddened with blood, he resembled a large cloud tinged by the setting sun. Sītā cried out and ran toward him. Gently, stroking his head, She called out Rāma.

Lord Rāma considered Jaṭāyu to be as worthy of His worship as Daśaratha. Despite Sītā’s kidnapping, heartbroken Rāma 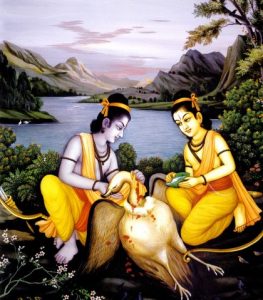 asked Lakṣman to fetch logs so that they could build a funeral pyre. Grateful Rāma looked at the bird and said, “You will attain unsurpassed realms of happiness, O king of birds. Never again will you take birth in this mortal world of pain and suffering.”  Rāma who couldn’t perform, his beloved father’s cremation, himself carried out the final rites reciting the sacred mantras and cremated Jaṭāyu.

Both brothers went to the Godāvarī, they bathed in the river and then offered its sacred water to Jaṭāyu’s departed soul. After the completion of the final ritual, Rāma and Lakṣman were pleased, acknowledging that, Jaṭāyu had advanced to the divine regions of un-ending happiness. Then they fixed their minds on Sītā and went to find her as directed by Jaṭāyu, before his demise.