Rasa – The essence of relationships 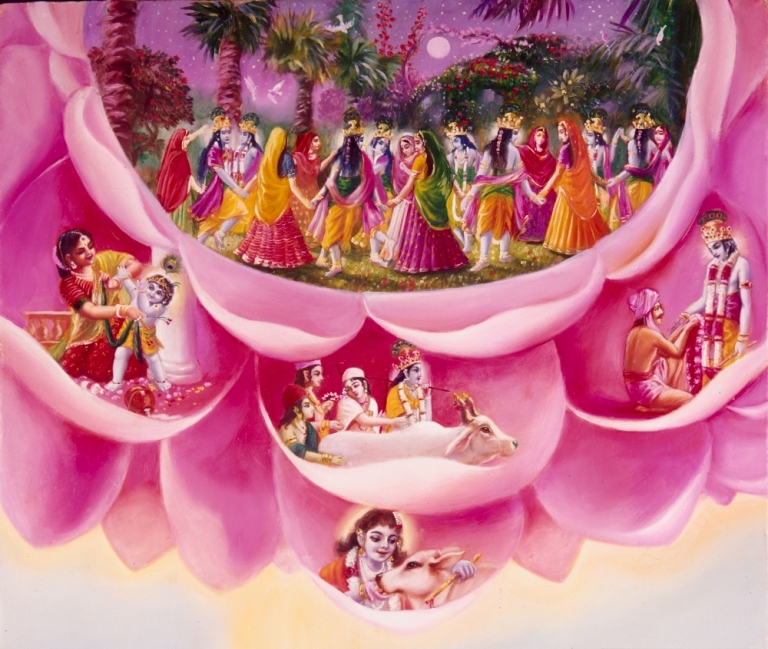 Arjun, a young boy from Bengaluru was travelling to Delhi. On the station, when the train arrived the people rushed in pushing each other and Arjun had no choice but to wait for his turn. As he was about to board, he heard a voice, as sweet as that of a cuckoo – S-T-O-P!  Arjun turned back to perceive the source of the sound.

A girl was running towards him. Her open hairs waving along with the wind, her petal lips saying something which Arjun never could decode, and those mesmerizing blue eyes blinking as the sun plays with the clouds dumbfounded Arjun. He was awestruck on the very first sight of her. The next moment he realized the train had left. Arjun hurriedly turned back to check on her and there she was, with thousands of emotions easily decodable. Her petal lips had faded for she was sad, those pretty eyes were all wet, and her fair face had turned pink due to combined emotions of sadness and anger.

As she left disheartened, Arjun could only watch her pass by, his mind began to fancy her, as his friend, a conjugal lover, an adored relationship and he was blushing to imagine the parenthood he could have, with her as his life partner. Arjun was frozen, the violins wouldn’t stop and by the time he could collect himself she disappeared and with Arjun remained only those best moments. Arjun still desires to see her again, know her name, get in touch with her, get a touch of her and as he still awaits her. He didn’t mind missing his train now, for he wanted his life on the track of his new-found love, and didn’t want that derailed. He decided to pursue this newfound origin of his rasa-mellow of relationships.

Like Arjun, all the living beings are eligible to pursue or desire all the essences of relationship and enjoy the material mellows. But not every Arjun can get hold of his adorable partner to enjoy the rasa-mellow of relationships; and even if one does succeed in finding the right one, the attempt to enjoy this rasa doesn’t last for an eternity.

Yet, this very hankering for the rasa and its source, by looking for it in different persons and objects of this world, indicates the innate desire of every living entity-the soul’s longing for rasa. We, the jivas-individual spirit souls, hold an eternal relationship with the Supersoul, the Supreme Lord. Every jiva holds a specific rasa-mellow in which the relationship with the Supreme Lord is relished, not temporarily but for eternity. It is but a perverted reflection of that rasa, which exists in the relationships between the various jivas in this material world.

The entire universe is rasa and we are floating on it. Just like the trees that supply fruits or the cows, which supply profuse quantities of milk and similar other necessities to satisfy our different tastes, act as the reservoir, similarly, the Supreme is the reservoir of the Rasas or taste we seek to experience, in this existence.

Every living entity, from human beings, to an ant, desires to relish some sort of taste derived from their sense perceptions. These sensual pleasures are technically termed as rasas. Such rasas are of different varieties. There are twelve different types of rasas, five primary and seven secondary.

In the Vedic scriptures the following twelve types of rasas are mentioned:- 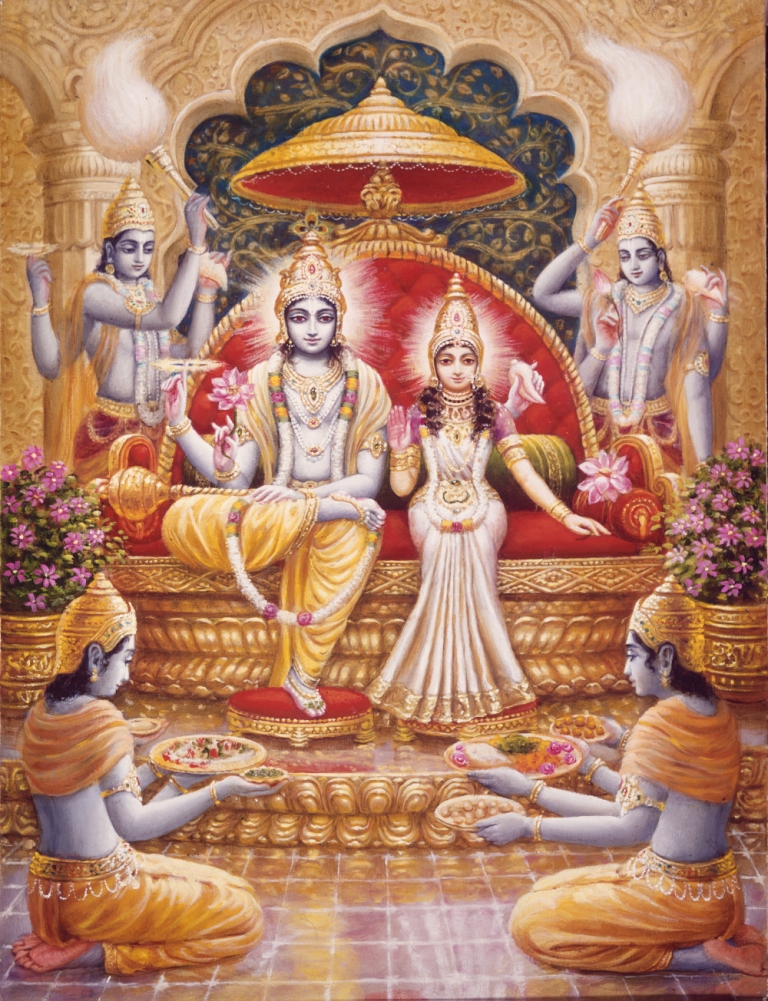 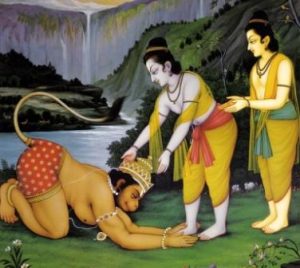 All these rasas as a whole are called affection or love. The primary rasas or signs of love are manifested in adoration, service, friendship, paternal affection, and conjugal love and when the primary rasas are absent, rasa is present indirectly in comedy, chivalry, anger, wonder, fear, shock and so on.

The śānta–rasa is an appreciation of the Lord in terms of His greatness, opulence, omnipotent nature, kindness, etc. In dāsya-rasa, awe and the reverence of śānta-rasa are still there, but you have added service to the Lord. So śānta-rasa promotes to dāsya-rasa.

A devotee does not want to serve anybody except the perfect personality Krishna. So dāsya-rasa includes śānta-rasa. In sakhya-rasa, dāsya’s servitude and appreciation are there, but the formality of dāsya is gone. For instance, Krishna and Balarama fight with all the cowherd boys and then Krishna loses. Whoever loses has to carry the other on the back, so Krishna carries Sudama on the back. Thus there is a sweet exchange of intimacy which slowly begins in sakhya-rasa.

Then in vātsalya-rasa little more intimacy, but then one more element is added. The vātsalya rasa is a protective and nurturing relationship.

When Krishna opens His mouth, mother Yashoda sees all kinds of stars and everything in His mouth and thinks that something has happened to her son. Then immediately she prays to all the demigods that nothing should happen to Him. 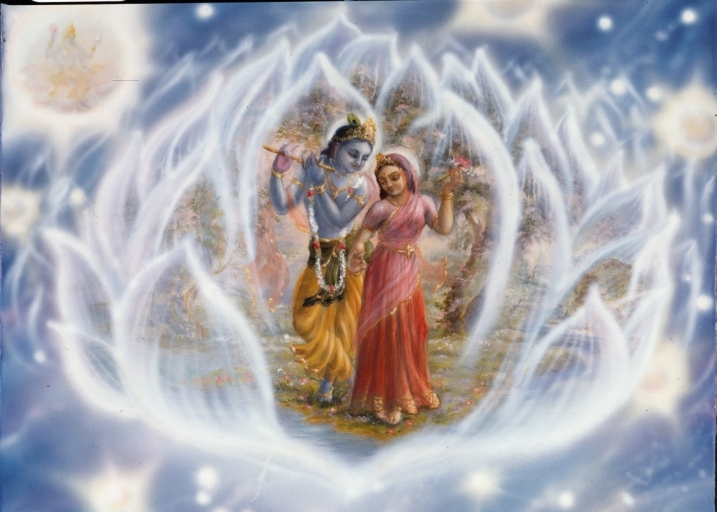 Then in mādhurya-rasa, everything is there – formality is broken and there is an appreciation for Krishna which is full of care and nurturing. When the gopis see Krishna walking, their heart is pained by the thought of some stone or thorns pricking His feet. They want to lay their bodies down for Krishna to walk on them. The gopis give their body to Krishna – complete surrender, ātma-nivedanam.

The devotees who were epitomes of the different primary rasas are as follows: Prithu Maharaja (śānta-rasa), Hanuman (dāsya-rasa), Arjuna (sakhya-rasa), Yashoda (vātsalya-rasa) and Radharani (mādhurya-rasa).

Are the Rasas real?

adhah-śākha ūrdhva-mūlam This means these material varieties are also a representation of all the rasas. But they are the reflection. It is compared with the mirage. Just like the desert, there is a reflection of water. The impression of water is present because there is water somewhere. Similarly, all this perverted reflection of śānta rasa, dāsya rasa, sakhya rasa, are just like a mirage. It is simply a reflection. It is not real. Besides, we are trying to taste the five rasas in this material world which turns unfruitful because these rasas are originally present in the spiritual realm. Ūrdhva-mūlam adhah-śākha. And because in the spiritual world it is real, we are taking these reflections as real even in the material world.

When will one be happy?

In the Sruti Mantras, Vedic hymns, the Supreme Lord is described as “the fountainhead of all rasas.” When one associates with the Supreme Lord and exchanges one’s constitutional rasa with the Lord, then the living being is truly happy. In the liberated condition only, such primary Rasas are experienced in fullness. Therefore, the devotees who serve the Lord directly in the primary Rasa are eternal servitors than those who serve Him in the secondary Rasas.

Therefore, the bhakti creeper finds its resting place at the lotus feet of Krishna, in the spiritual world. A relation between the living being and the Supreme Lord can take any form out of the five principal rasas, and it does not make any difference in the transcendental degree to the genuine devotee. The actual position of the living being is to serve the Lord and nothing more. One who attains this knowledge will not just be happy but will be at a state of eternal bliss.

The original constitutional position of each one of us is in relation with the Lord in any of these rasas. By performing sādhana bhakti (the execution of devotional service according to regulative principles), we come to realize our original constitutional position and go back to Vaikuntha, our eternal home where we can relate with the Lord in our original rasa.