Are you aware of the different events and rituals related to the world-famous Ratha Yatra at Jagannath Puri? Read this article.

Jagannath Puri in Odisha is the abode of Lord Jagannath (the Lord of the Universe) and is also known as Purushottama Kshetra. It is one of the four holy kshetras of India. Here, the Supreme Lord is worshiped with His elder brother Balarama and His sister Subhadra. The Ratha Yatra of Lord Jagannath, held every year on the second day of the bright fortnight of Ashadha (June – July), attracts lakhs of devotees and pilgrims from all over the world. It is said: rathe ca vamanam drstva punar janma na vidyate—One who sees the Lord on the chariot on the Ratha Yatra day can attain salvation from the cycle of birth and death. 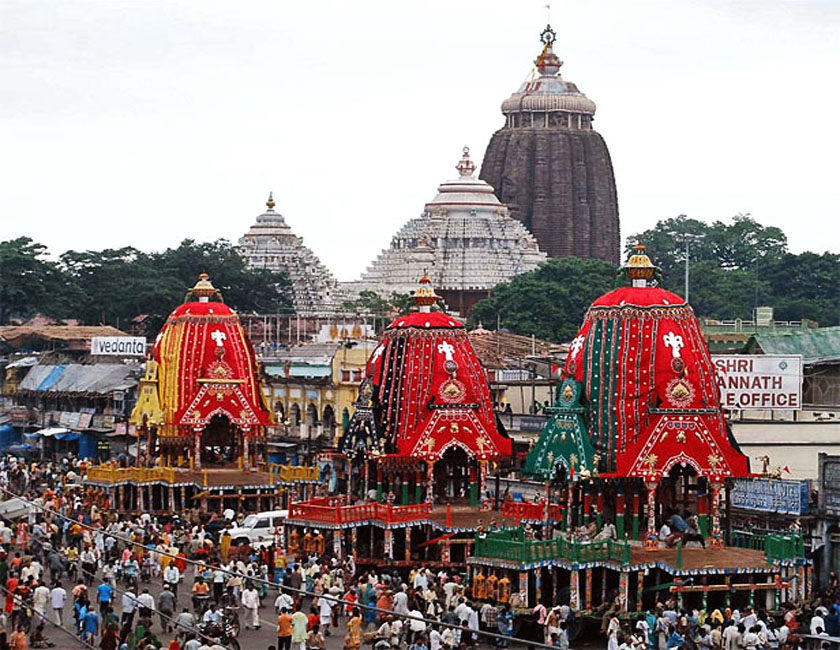 The preparation for the Ratha Yatra starts from the auspicious day of Akshaya Tritiya (the third day of the bright fortnight in the month of Vaishakha). On this day the construction of the chariots for the Ratha Yatra begins. Three different sizes of chariots are made every year. The chariot of Lord Jagannath is called Nandighosh. It is 45 ft high and has 16 wheels. It is covered with cloth of red and yellow colors. The insignia of Sudarshana Chakra is placed on top of it. The chariot of Balabhadra is called Taladhvaja, the chariot of Mother Subhadra is called Padmadhvaja (also known as Darpadalana). Taladhvaja, covered with cloth of red and green colors is 44 ft high and consists of 14 wheels. The 43 ft Padmadhvaja having 12 wheels is covered with red and black clothes.

The Journey to Gundicha Temple Lord Jagannath travels from His Sri Mandira (temple in Jagannath Puri or Niladri), to His garden temple, Gundicha, located in Sundarachala. This temple is situated two miles north-east of the Jagannatha Temple. The residents of Odisha, hence, refer to this festival as Gundicha Yatra. When Lord Krishna went to Mathura and from there to Dvaraka, the gopis of Vrindavana were feeling separation from Him. They did not go with Him because they did not like the opulence of Dvaraka. They wanted to enjoy with Krishna as Shyamasundara in the groves of Vrindavana. Once the gopis of Vrindavana headed by Radharani met Krishna at Kurukshetra during the solar eclipse. They wanted to take Krishna back to Vrindavana. They pulled the chariot of Krishna, Balarama and Subhadra and walked towards Vrindavana. Ratha Yatra symbolizes this mood of devotees and the Gundicha temple symbolizes Vrindavana. Thousands of devotees pull the grand chariots accompanied by the sounding of conches, trumpets, drums and cymbals. Musicians and dancers perform for the pleasure of the Lord in front of the chariots. 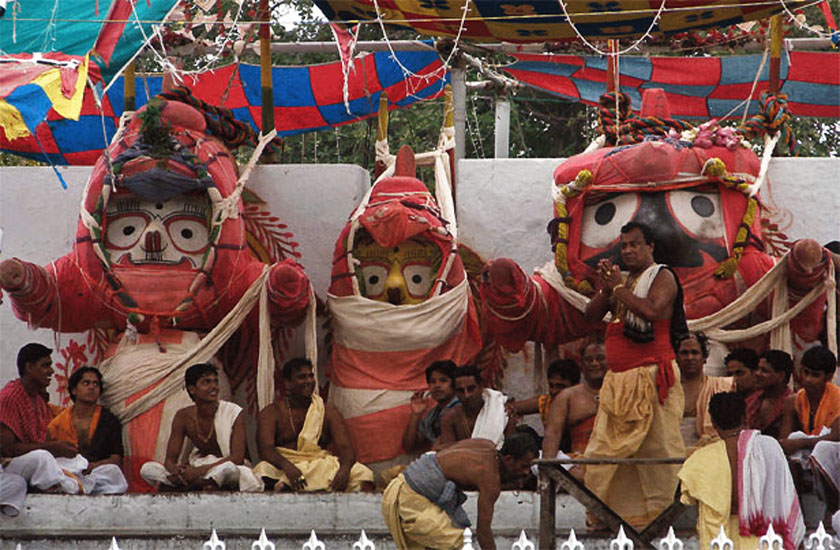 Snana Yatra, the bathing ceremony of Lord Jagannath takes place a fortnight before, on Jyeshtha Purnima (the full moon day in the month of Jyeshtha). The Deities of Jagannath, Baladeva, Subhadra, Sudarshana and Madana-mohana (the utsava vigraha) are brought to the snana-vedi and ceremonially bathed with 108 pots of sanctified water drawn from the well situated in the northern side of the temple. After the bathing ceremony, Lord Jagannath apparently becomes sick and moves into His private apartment. For a period of fifteen days no one can see Him. This is called anavasara. The renovations are made on the body of the Jagannath Deity at this time. This is called nava-yauvana (to indicate that the Deity of Jagannath is being restored to youth again). Once again the Lord gives darshana to the public on the day of Ratha Yatra ceremony. A dramatic account of Sri Chaitanya Mahaprabhu’s miraculous activities at the Ratha Yatra is presented in the Madhya Lila section of Sri Chaitanya Charitamrita, a biographical account of Chaitanya Mahaprabhu written by Krishnadasa Kaviraja Gosvami. After accepting sannyasa, Sri Chaitanya Mahaprabhu stayed in Jagannath Puri, making it His headquarters. During anavasara, being unable to see Lord Jagannatha, Chaitanya Mahaprabhu could not tolerate the separation and went to the temple of Alalanatha in Brahmagiri. Later He returned when the devotees of Bengal came to meet Him. He organized Gundicha-marjana (washing and cleaning of Gundicha Temple) and He personally cleansed the Gundicha temple along with His associates. The Lord cleaned everything inside the temple, including the ceiling; and then they cleaned all the other temple buildings including the kirtana hall. They were all chanting the holy name of Lord Krishna all the time. They also cleaned the bhoga-mandira and all the residential quarters, one after another. The Lord then ordered the devotees to cleanse the inside of the temple for the second time by removing finer dust, straws and grains of sand. Hundreds of pots of water was thrown on the floor and ceiling to wash the temple. Even the roads were cleansed. The devotees performed grand sankirtana and Chaitanya Mahaprabhu danced in ecstasy. Then the devotees took rest and went to take a bath. Sri Chaitanya Mahaprabhu distributed prasadam to all the devotees who participated in the gundicha-mandira-marjana-seva. Even today this tradition is followed and devotees clean the Gundicha temple as a preparation for Ratha Yatra. 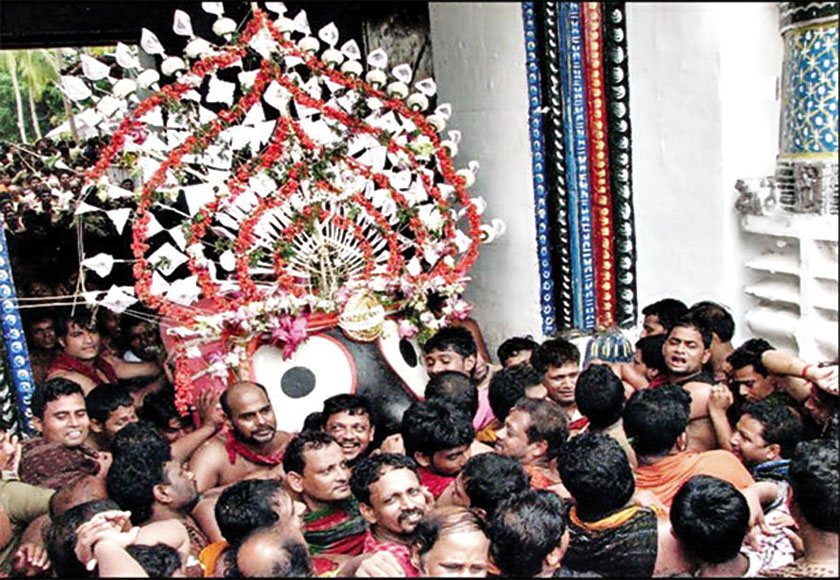 After being treated for fifteen days in seclusion, the Lord appears in front of His devotees in His ever-youthful form on the day of Ratha Yatra. He is taken in procession to the chariot. This ceremony is called Pahandi Vijaya. The Gajapati King personally cleans the road with a gold-handled broom and sprinkles scented water and sandalwood powder, a tradition which is followed from the time of Sri Chaitanya Mahaprabhu when Maharaja Prataparudra took up this menial service to Lord Jagannath. By accepting such a humble attitude Maharaja Prataparudra pleased Chaitanya Mahaprabhu. The descendants of Maharaja Prataparudra remember his example. Even today, before the Ratha Yatra starts, the king of Odisha takes a gold-handled broom and sweeps the road in front of Lord Jagannath’s chariot. Devotees perform grand sankirtana in front of the Ratha. The chariot of Baladeva, Taladhvaja, moves first, followed by the chariot of Subhadra Devi. The Nandighosha chariot of Lord Jagannatha comes in the last. Varieties of foodstuff is cooked and offered to the Lord and the same is distributed as prasadam to the public. Thus the Lord reaches the Gundicha temple. He stays there for a week. 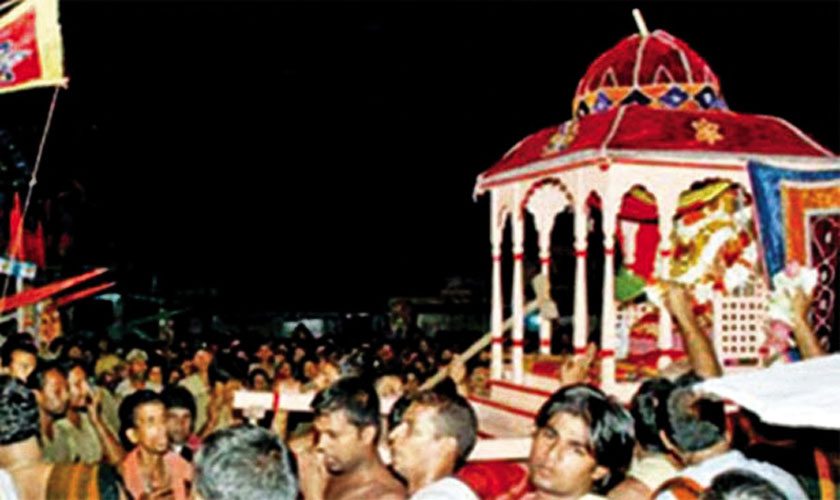 Lord Jagannatha leaves His Sri Mandira with His brother and sister. On the fifth day, Goddess Lakshmi starts worrying about her husband. She personally goes to Gundicha Mandir to call her husband back home to the Sri Mandira. The Lord agrees to return soon and gives her agya mala (the garland of consent). To vent out her anger, Lakshmi devi orders her attendants to break the Nandighosha ratha. This ceremony is known as Ratha-bhanga. However due to fear of the repercussions of her angry act, she hides behind a tamarind tree outside Gundicha temple and secretly escapes through another lane to her home temple at Sri Mandira. After spending seven days in the Gundicha Temple, the Lord returns to His Sri Mandira in the same Ratha. This is known as Bahuda Yatra. On the way back, Lord Jagannath stops in the Mausima temple to meet His aunt. A special offering is made for the Lord with rice, coconut and lentils mixed with jaggery. After that the Lord arrives at Singha-dwara. Lakshmi devi sees the Lord from a pavilion and she comes out in a palanquin to meet the Lord, receives His garland and then goes back to the temple to wait for Him. The next day is Ekadashi and the Lord is offered a special drink known as Adhara Pana. On that evening, all the three Deities are adorned in Sunar vesha and lakhs of pilgrims throng around the Ratha to get the glimpse of the Sunar Vesha Darshana of the Lord. The next day the Lord goes back to the Sri Mandira (His temple in Niladri).

Ratha Yatra celebrations across the globe

The Festival of Chariots