Godhead and His Potencies

Did you know that three-fourths of the entire creation is manifested by the spiritual potency of the omnipotent Godhead? 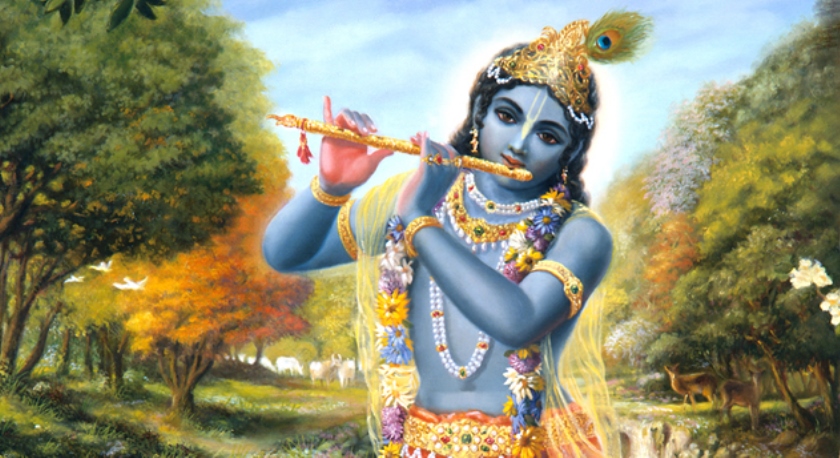 The fire exists in one place and expands its light and heat everywhere. Similarly, the omnipotent Lord is situated in His eternal abode, Goloka Vṛndāvana; but He expands Himself both in the material and spiritual worlds, by His various potencies.  parāsya śaktir vividhaiva śrūyate (Śvetāśvatara Upaniṣad 6.8) His energies are innumerable and immeasurable. But primarily all these potencies can be grouped into three principal divisions:

These three potencies are described in Viṣṇu Purāṇa (6.7.61)

The original potency of Lord Viṣṇu is superior. The living entity (kṣetrajña) actually belongs to that superior energy. The third energy, called the material energy, makes the living entity act in ignorance and engages him in fruitive activities.

Comparison of Spiritual Potency and the Illusory Energy of the Lord

The Supreme Personality of Godhead is the master of all these potencies. The activities of internal and external potencies are almost similar, but there is a difference in both quality and quantity. The spiritual worlds, manifested by the internal potency, constitute three-fourths of the entire creation; whereas the material worlds, manifested by the external potency constitute the remaining one-fourth. This is the quantitative difference. 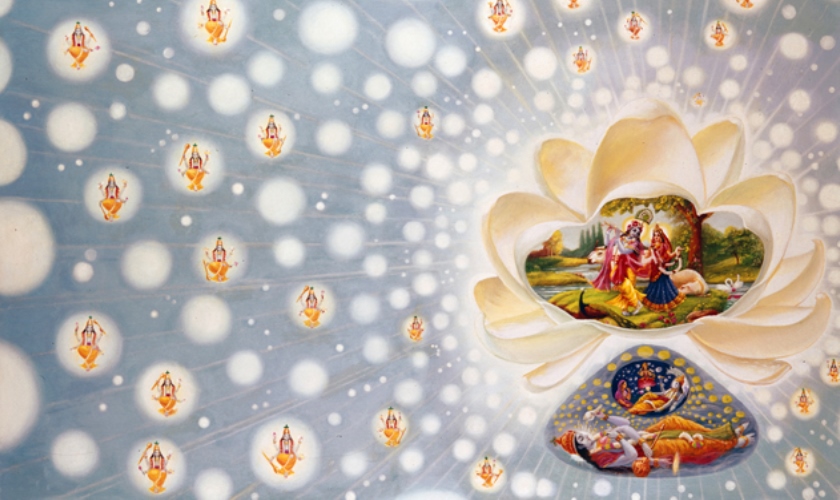 The spiritual potency or the superior nature of the Lord is eternal (sanātana) and is never annihilated (na vinaśyati). When everything in this world (which is the creation of the inferior nature or māyā śakti) is annihilated, that part remains as it is.

The second qualitative difference is that the spiritual creation is real, whereas the material creation is illusory. The former is light and the latter is darkness. In darkness one cannot find what he wants. Similarly, in the darkness of material world one can never find what he searches for.

The spiritual creation is described as sat-cit-ānanda (eternal, full of knowledge and bliss) and the material world is asat-acit-nirānanda (temporary, full of ignorance and full of miseries). Thus the search for eternal existence and permanent happiness cannot be satisfied in the material world characterized by the darkness of ignorance.

Nature of the Living Entity 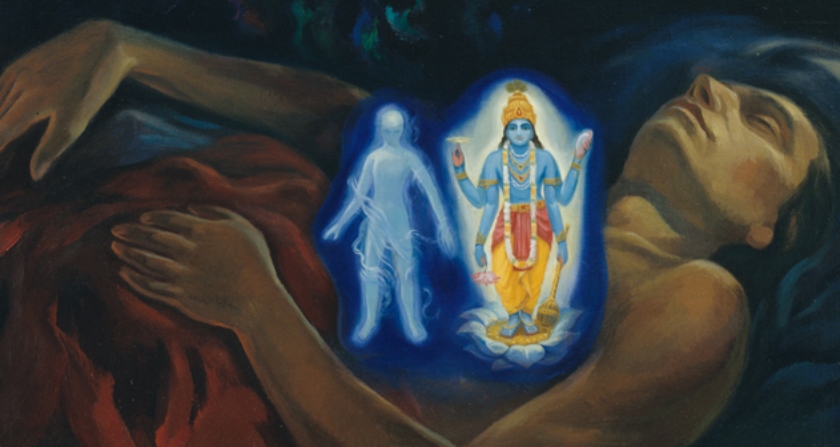 The living entities (jīva śakti) are  also superior energy and this is confirmed by Kṛṣṇa in Bhagavad-gītā (7.5)

The soul (spirit of living entity) is never born; and it never dies. It is unborn (ajaḥ), eternal (nityaḥ), ever-existing (śāśvataḥ) and primeval (purāṇaḥ). It is not annihilated even after the destruction of the body.

Further it is stated that the soul can never be cut to pieces by any weapon, nor burned by fire, nor moistened by water, nor withered by the wind. He is everlasting (nityaḥ), present everywhere (sarva-gataḥ), unchangeable (sthāṇuḥ; does not undergo any changes), immovable (acalaḥ) and eternally the same (sanātanaḥ).

The living entity is called the marginal potency of the Supreme Lord (taṭastha śakti) because he can either be in the spiritual world created by the internal potency or in the material world created by the illusory energy. The relationship of the living entity with the Supreme Lord and His internal potency is eternal and permanent; but due to the forgetfulness of his real nature, he comes under the influence of the māyā śakti.

The Nature of Material Existence 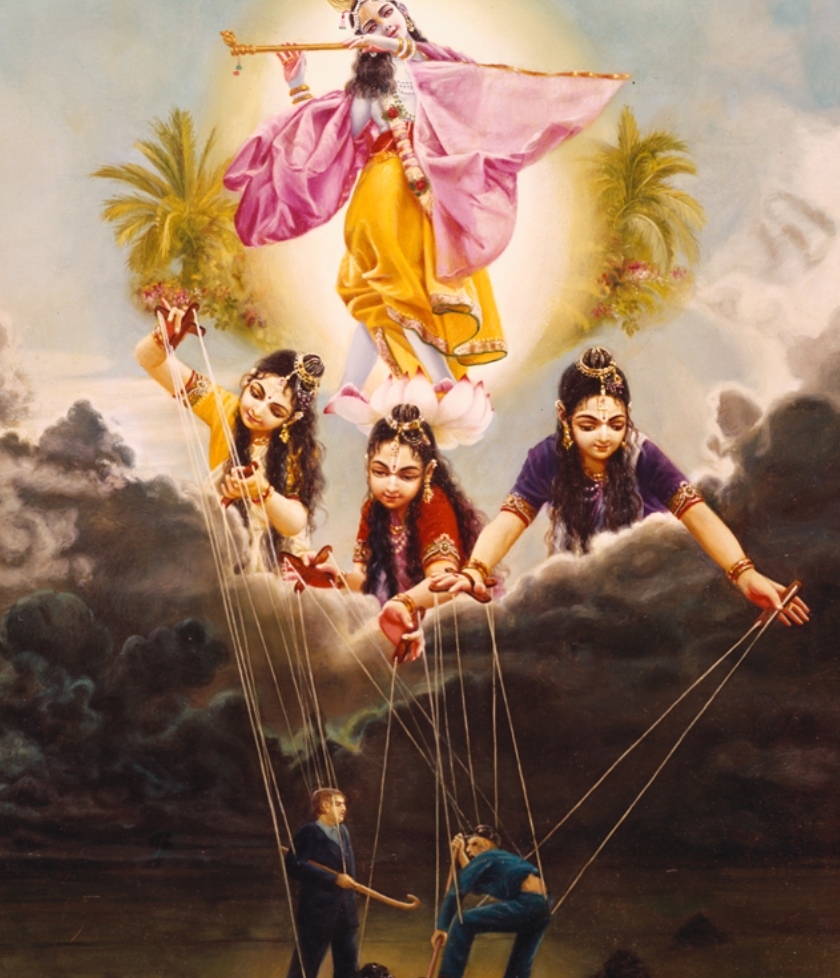 What is the cause of this material existence? Why does the living entity forget his eternal relationship with the Lord? Why does he come under the influence of the inferior energy? The reason is explained in Prema-vivarta.

The word bahirmukha refers to a person who is hankering after material enjoyment. When he wants to enjoy independent of Kṛṣṇa, he comes under the influence of the external energy and identifies himself as one of the creations of material nature. As a consequence, he suffers the three-fold miseries in this material world. The three-fold miseries are:

The material nature is also described as guṇa-mayī: it consists of three modes: goodness, passion and ignorance. When the eternal living entity comes in touch with the material nature, he becomes conditioned by these three modes and thus they are bound. The word guṇa also means rope. The conditioned souls are bound by the strong ropes of goodness, passion and ignorance.

The desire for eternal existence also cannot be satisfied in this material world because the eternal living entity identifies himself with the perishable material body and thus his existence is threatened due to the temporary nature of the material world, keeping him always in a state of fear.

The root cause of fear in this material world is the misidentification with the material body. Due to absorption in the external, illusory energy of the Lord, the living entity forgets his own constitutional position and his relationship with the Supreme Lord. Thus, he gets bewildered by māyā.

Reviving the Eternal Relationship with the Supreme Lord 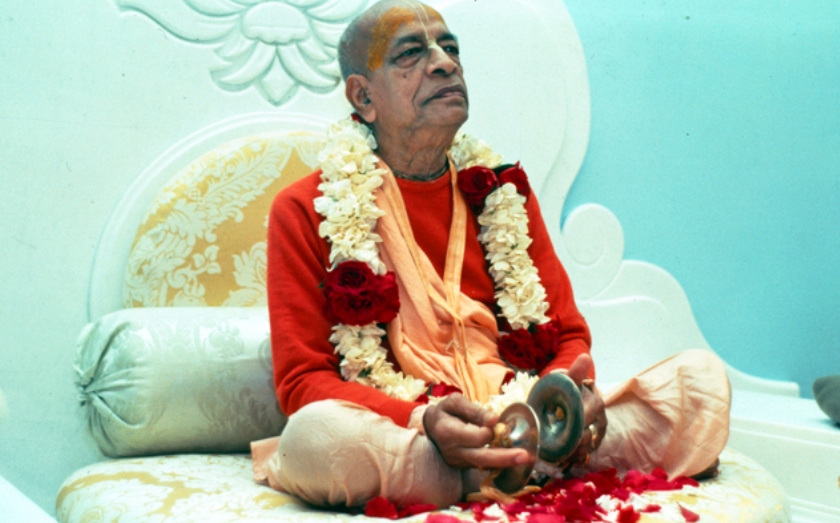 The solution is prescribed in the Vedic scriptures:

Do not remain in the state of non-existence. Wake up to the reality. Do not remain in ignorance. Come to Light. This is the call of Vedas. The Vedas and Purāṇas are meant for leading the forgetful living entity from the darkness of material world to the transcendental spiritual world by reminding him of his eternal relationship with the Supreme Lord. The process of reviving this relationship is to engage in devotional service of the Lord as prescribed in the scriptures under the guidance of a bonafide spiritual master.

The spiritual master is offered prayers with the following verse:

I was born in the darkest ignorance, and my spiritual master opened my eyes with the torch of knowledge. I offer my respectful obeisances unto him.

Only a bonafide spiritual master can open our eyes with the torch of knowledge and lead us to light from the darkness of ignorance. Irrespective of caste, creed and color, anyone can engage in the transcendental service of the Lord and thus attain spiritual perfection. The simple process recommended for this age of Kali is to chant the holy names of the Lord. The Supreme Lord appeared as Śrī Caitanya Mahāprabhu to inaugurate the transcendental sankirtana movement to encourage everyone to participate in the congregational chanting of the holy names of the Lord. He prescribed chanting of the specific names:

Śrīla Prabhupāda, the Founder-Acārya of the International Society for Kṛṣṇa Consciousness, propagated this movement all over the world. We request everyone to take advantage of this movement and chant this mahā-mantra every day at any convenient time along with the family members for the benefit of everyone.