Be a vegetarian and save animals… An interesting article about some celebrities who were vegetarians. 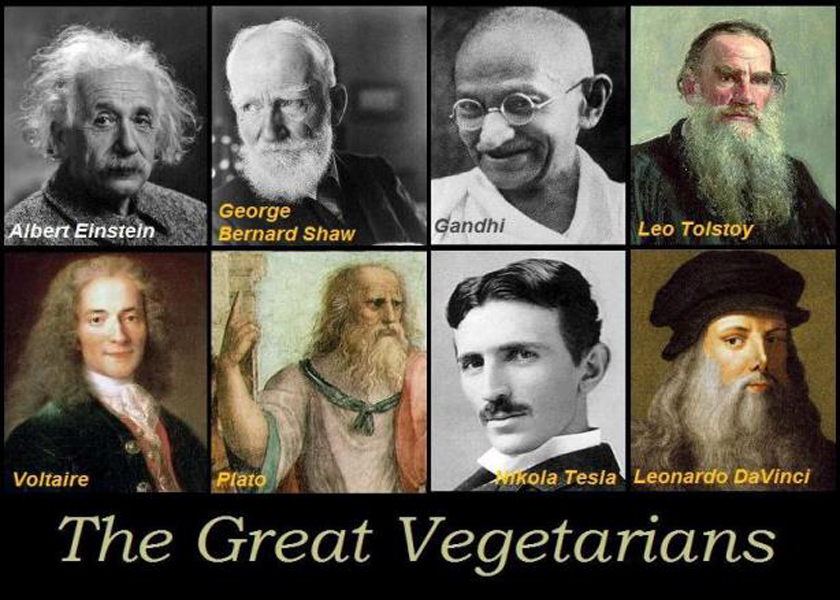 It is commonly heard that being vegetarian is getting trendy these days. People adopt a vegetarian regime out of curiosity, for health benefits, on embracing of a new religious belief or out of mere kindness towards animals. Historical truths show that being vegetarian has always been a lifestyle for some communities around the world. Some recognized communities that have always had a vegetarian way of life hail from India. There have also been some inspirational and famous die-hard vegetarians all over the world who have always sworn by their natural green intake. Here is a collection of names of popular persons across the world that prefers a green diet.

In fact, important figures in history have thrived on a plant-based menu for hundreds of years. What is to be learnt from famed vegetarians in history?

This Greek scholar, known for his math theorem lived over 2500 years ago and ate a meatless diet, called the “Pythagorean diet” until the word vegetarian became popular in the late 1800s.

He said “as long as men kill animals, they will kill each other. He who propagates the seed of murder and pain can never reap joy and love.”

Born in 1452, this Renaissance man was famous for his study of mathematics, aerospace, engineering, art, etc.

His vegetarianism has been credited to reading about the life of Pythagoras. He said, “My body will not be a tomb for other creatures.” So intense was his love for animals that he would liberate animals from meat markets.

English author Percy Shelley may have become a vegetarian to be as different as possible from a father he hated. In 1813 he wrote “A Vindication of Natural Diet.” In this he dared the flesh eater to “tear a live lamb with his teeth and, insert his head into its vitals and slake his thirst with the hot blood.”

Another English author, Shelley is famous for her work Frankenstein and was a practicing vegetarian. She made the well-known monster of her classic book a plant-eater and wrote for him that “my food is not that of man, I do not destroy the lamb to flood my appetite; acorns and berries afford me sufficient nourishment.”

Gandhi turned to civil disobedience to lead a forceful movement for India’s independence. One of his powerful teachers was a Jain philosopher who stressed ahimsa or nonviolence to living things. Gandhi wrote that “to my mind the life of a lamb is no less precious than that of a human being. I should not take the life of a lamb for the sake of the human body.”

Author of Pygmalion, Bernard Shaw received the Nobel Prize in Literature in the year 1925. He says his vegetarianism is due to the influence of Shelley and towards saving money on food during his lean years. He is most famous for saying “animals are my friends and I don’t eat my friends.”

He became the second vegetarian recipient of the Nobel Prize in Literature (after Bernard Shaw) in 1978. Adopting vegetarianism in 1962, he explained that “when you slaughter a living being, you slaughter the Lord.”

The 1968 US Presidential candidate is known for his humor and political activism. He wrote that “Martin Luther King taught us all nonviolence. We were told to extend nonviolence to the mother and her calf.”

Few living figures are as well-known as this Beatle who continues to perform music worldwide. He is known for his dedication to animal rights. He has done many ads for PETA and narrates a video with the famous line that “if slaughterhouses had see-through walls, everybody would be a vegetarian.”

Recognized worldwide, Albert Einstein embraced vegetarianism toward the end of his life. He believed that man was not born to be a carnivore and he said forcefully that “nothing will benefit human health and increase chances of survival for life on earth as much as the evolution of a vegetarian diet.”

A popular Canadian actress and showgirl, Pamela Andersen endorses vegetarianism. She has been a campaigner on animal rights and one of the leading members of PETA. She is a vegan since her teenage.

A retired American boxer, he is the world champion in the heavyweight list. Mike Tyson vouches for a wholly vegan diet. He regrets that he was not a born vegan.

He supports People for Ethical Treatment towards Animals (PETA) and meticulously promotes the ‘Go Green’ campaign. He has been a strict vegetarian for quite a substantial part of his life. Given below is a list of famous personalities, both past and present who adopted a vegetarian way of life.

A plant based diet is increasing in popularity and in some countries is well over 10% of the population. Many celebrities serve as role models for this movement. The positive impact of the expanding plant-based movement is a bright spot for the world.

The lists given above may be long but they shall always be incomplete. Many celebrities and commoners are turning towards vegetarian diet perpetually. It helps make you hale and hearty and animal friendly.