Abhay (Srila Prabhupada’s name) wanted to have his own cart and perform his own Ratha-yatra, and naturally he turned to his father for help. His father, Gour Mohan agreed, but there were difficulties. When he took his son to several carpenter shops, he found that he could not afford to have a cart made. On their way home (in Kolkata), Abhay began crying, and an old Bengali woman approached and asked him what the matter was. Gour Mohan explained that the boy wanted a Ratha-yatra cart but they couldn’t afford to have one made. “Oh, I have a cart,” the woman said, and she invited Gour Mohan and Abhay to her place and showed them the cart.

It looked old, but it was still operable, and it was just the right size, about three feet high. Gour Mohan purchased it and helped restore and decorate it. Father and son together constructed sixteen supporting columns and placed a canopy on top, resembling as closely as possible the ones on the big carts at Puri. They also attached the traditional wooden horses and driver to the front of the cart. Abhay insisted that it must look authentic. Gour Mohan bought paints, and Abhay personally painted the cart, copying the Puri originals. His enthusiasm was great, and he became an insistent organizer of various aspects of the festival. But when he tried making fireworks for the occasion from a book that gave illustrated descriptions of the process, his mother, Rajani, intervened.

Abhay engaged his playmates in helping him, especially his sister Bhavatarini, and he became their natural leader. Responding to his entreaties, amused mothers in the neighborhood agreed to cook special preparations so that he could distribute the prasadam at his Ratha-yatra festival.

Like the festival at Puri, Abhay’s Ratha-yatra ran for eight consecutive days. His family members gathered, and the neighborhood children joined in a procession, pulling the cart, playing drums and hand cymbals, and chanting. Wearing a dhoti and no shirt in the heat of summer, Abhay led the children in chanting Hare Krishna and in singing the appropriate Bengali bhajana, Ki kara rai kamalini.

What are you doing, Srimati Radharani?

Please come out and see.

They are stealing Your dear most treasure —

If the young girl only knew!

Treasure of Her heart,

Is now forsaking Her.

Abhay copied whatever he had seen at adult religious functions, including dressing the deities, offering food, offering arati with a ghee lamp and incense, and making prostrated obeisances. From Harrison Road the procession entered the circular road inside the courtyard of the Radha-Govinda temple and stood awhile before the Deities. Seeing the fun, Gour Mohan’s friends approached him: “Why haven’t you invited us? You are holding a big ceremony and you don’t invite us? What is this?”

“They are just children playing,” his father replied.

“Oh, children playing?” the men joked. “You are depriving us by saying this is only for children?”

While Abhay was ecstatically absorbed in the Ratha-yatra processions, Gour Mohan spent money for eight consecutive days, and Rajani cooked various dishes to offer, along with flowers, to Lord Jagannatha. Although everything Abhay did was imitation, his inspiration and steady drive for holding the festival were genuine. His spontaneous spirit sustained the eight-day children’s festival, and each successive year brought a new festival, which Abhay would observe in the same way.
– Excerpts from an article in Back To Godhead, January 1982. 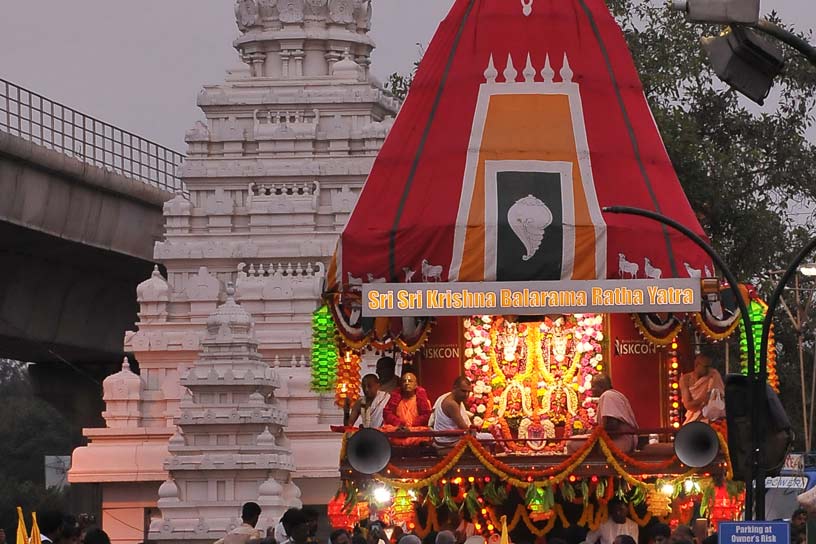 ISKCON Bangalore‘s Ratha or chariot is a perfect fusion of modern technology and ancient tradition.

In spite of its traditional looks, it has several state-of-the-art features like air brakes and a steering wheel having a very good suspension which makes it feasible to traverse even over long distances by just replacing its wheels with tyres.

The canopy of this Ratha is another unique feature, which, with the help of an electric motor can be moved vertically upwards or downwards.

The height of this Ratha is about 26 ft from the ground level when the canopy is fully lifted. The Deities are placed at about 10 ft above the ground level. The Ratha has a hundred and ten feet long sturdy rope on either sides of it (one for men and the other for women) making it possible for about 500 persons to pull it at a time.

The temple staff takes adequate safety measures like deploying a wheel protection team (who ensure that people don’t come close to the wheels) and arranging a sound system to communicate and control the surging devotees which in turn would help in the easy progress of the Ratha.