Read about Srila Gaurakishora Dasa Babaji, one of the great acharyas in the disciplic succession originating from Lord Krishna. 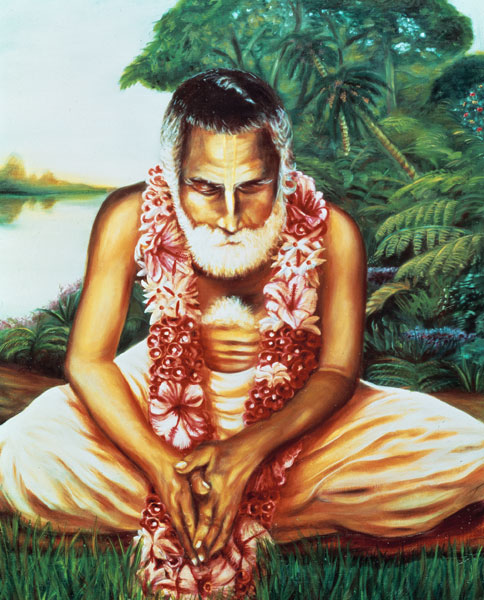 I offer my respectful obeisances unto Srila Gaurakishora Dasa Babaji Maharaja [the spiritual master of Srila Bhaktisiddhanta Sarasvati], who is renunciation personified. He is always merged in a feeling of separation and intense love of Krishna.

Srila Gaurakishora Dasa Babaji was born in 1838. He spent almost thirty years as a householder looking after his wife and family. After his wife died, he gave up his business as a grain merchant and approached Bhagavata Dasa Babaji, a disciple of Srila Jagannatha Dasa Babaji, for Babaji initiation. For the next thirty years Srila Gaurakishora travelled from village to village in Vrindavana, continually worshiping the Lord. He lived by begging and slept under trees. He would lie prostrate, offering his humble obeisance to the residents of Vraja, considering them as embodiments of Lord Krishna. He even offered his obeisance to the flowers, trees, and land around him.

Srila Gaurakishora later moved to the Navadvipa where he was to spend the rest of his life, moving from village to village. He would consider these villages to be non-different from Vrindavana. He would dress himself in the discarded cloth used to dress corpses, beg rice from householders, and cook with discarded earthen pots. He would dance on the banks of the Ganges chanting the holy names of Krishna; at other times he would lie on the ground unconscious.

Srila Gaurakishora had very few possessions: Tulasi-mala (Tulasi beads) around his neck; another Tulasi-mala on which he chanted; and a few books such as Srila Narottama Dasa Thakura’s Prarthana and Prema Bhakti Chandrika.

Srila Gaurakishora Dasa Babaji refused service from anyone and would not let anyone serve him, though many tried. Although illiterate, he was vastly learned and self-realized. Many people would consult Srila Gaurakishora, but he was able to detect and reveal sincerity and deceit in people. He showed neither distaste for enemies nor affection for those dear to him. Srila Gaurakishora was surrounded by many insincere devotees but never encouraged them nor drove them away.

In 1900 Srila Gaurakishora Dasa Babaji accepted Bhaktivinoda’s son, Bimal Prasad, as his disciple. He gave him the name Varshabhanavi-devi-dayita Dasa, who later became known as Srila Bhaktisiddhanta Sarasvati Prabhupada, the founder of the Gaudiya Matha.

In 1908 Srila Gaurakishora Dasa Babaji Maharaja lost his sight. He refused attempts by Varsabhanavi-devi-dayita Dasa to take him to an eye specialist, preferring instead to chant and worship Krishna. He stopped travelling at this point. He would sit in his bhajana-kutir deeply absorbed in Krishna’s pastimes.

On 17 November 1915, Gaurakishora Dasa Babaji Maharaja passed away. His body was placed into a samadhi (tomb) but due to flooding, the samadhi had to be moved. Many Babajis tried to claim the samadhi but were told by Bhaktisiddhanta Sarasvati: ‘I am the only disciple of Paramahamsa Babaji Maharaja. Even though I have not accepted sannyasa, I am a celibate brahmachari and by the grace of Babaji Maharaja, I am not secretly addicted to abominable habits or involved in fornication as some monkey-like people are. If there is someone amongst the people here present who is a renunciate of stainless character, then he can have Babaji Maharaja’s samadhi. We have no objection to that. He, who within the last year, or the last six months, three months, one month or at least within the last three days, has not had illicit connection with a woman will be able to touch this spiritual blissful body. If anyone else touches it he will be completely ruined.’ A police inspector who was present asked, ‘How will evidence be had for this?’ Srila Bhaktisiddhanta Sarasvati replied: ‘I have faith in their word.’ At this, one by one all the bogus Babajis slipped away without a word. Srila Bhaktisiddhanta Sarasvati then claimed the samadhi.