Spiritual lessons to be learnt from demonetisation

The recent demonetisation in India inspired a spiritual practitioner who learnt some lessons from this bold move by the government. 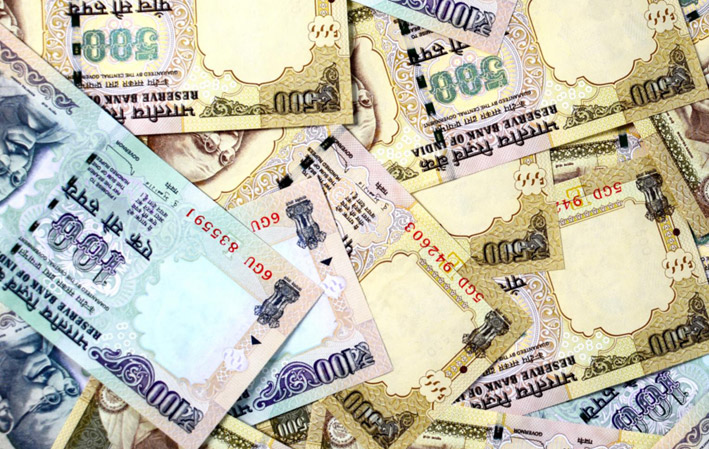 As I stood in the queue, waiting to withdraw money from the ATM, I was contemplating on the bold move by the government in banning the Rs 500 and 1000 notes.

No one expected this. It came as a shock to many, especially those who had counterfeit currency and black money.

Of course, common people had to face some inconvenience; but I observed that those who stood in the queue did not complain. They felt that this temporary inconvenience was for a greater good; and they all appreciated the decision.

Many of them were discussing the positive impact that this could create in the country’s economy; and how this would solve a lot of other problems too.

As a spiritual practitioner, it did not take me long to realize and appreciate that this situation had many valuable lessons for all of us.

On November 8, 2016 at 8:15 PM our honourable Prime Minister, Narendra Modi announced that Rs 500 and 1000 notes would no longer be legal tender from midnight of that day.

This sudden change was a great blow to many who had amassed a lot of such currency by illegal means and kept it out of their accounts to evade tax.

The currencies they had were nothing more than paper now… worthless paper.

There were reports of burnt currency notes being found, and notes being dumped in the rivers.

Some temples reported huge donations in their hundis. Probably some devotees had chosen to dump these notes in the temple hundis, expecting at least some pious credits (punya) in return. It is not that they were charitably disposed; it is just that they had no other option.

Whatever they had accumulated over the years were rendered useless by just an announcement banning the Rs 500 and 1000 notes.

The scriptures advise us not to accumulate more than what we need. Sri Isopanishad instructs us to accept only the bare minimum necessities of life, which are set aside as our quota.

If you leave a sack full of grains on the street, the birds may take a few grains – as much as they need for the day to fill their stomach. But a man will try to take away the entire sack, hoping to secure his future, thus depriving others of food. 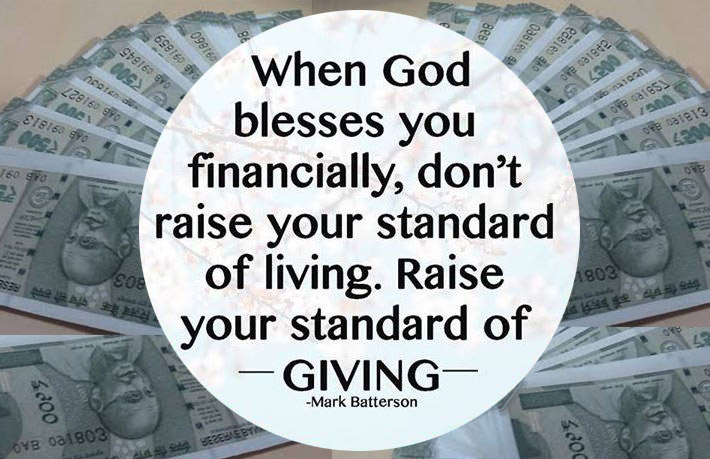 We have a tendency to accumulate more than what we need.

You may ask: What is wrong in accumulating money for a better future?

Saving something for our future needs is not wrong. But how do we know whether we are securing our needs or amassing wealth for our greed? Where do we draw the line?

Therefore, it is recommended that one should give away something in charity.

In fact, the Bhagavad-gita insists that one should never give up charity. Charity should be voluntarily given to a worthy person, at the proper time and place, without expecting anything in return. That is the standard.

This can set right the imbalance in the distribution of resources.

The demonetisation is a major step taken by the government to check black money, counterfeit currency and corruption.

One who earns a lot of money, more than what is required to satisfy the basic requirements, is expected to pay a portion of that earning as income tax to the government, so that the government can utilize it for welfare activities.

When someone acquires money illegally, and does not declare it to the government with the intention of not paying taxes, that money is black money.

In June this year, Prime Minister Narendra Modi cautioned the tax-evaders and requested them to comply with the tax regime before 30th September, or be prepared to face the music. (Ref: Mann Ki Baat June 2016)

Similarly we are duty-bound to pay tax to many others.

Who else do you think we are indebted to, either knowingly or unknowingly?

There is someone’s hard work behind every gadget or facility we use today. We are obligated to those great minds who gave us such comfortable life with their inventions and discoveries.

We are also obliged to the great sages and philosophers who gave the scriptures and various other literatures to guide us in achieving the goal of human life.

Even the trees, plants, animals, birds and insects deserve our kindness, for all the service they give us directly or indirectly. It is our duty to pay them back in a deserving manner. If we fail in this duty, we are punished according to the laws of nature.

Further, we enjoy the heat, light, air, water and many other natural resources. We cannot manufacture food grains, fruits or vegetables in factories. We have to depend on nature. The sunlight, moonlight, rainfall and air are not in our control.

The Supreme Lord has given us all the necessities of our life in this world.

Do we acknowledge this? Do we express our gratitude every day for what He has given us?

Next time, when you are at the dining table, close your eyes for a moment and thank the Lord for the delicious food and accept it as His mercy (prasadam). When you drink a glass of water, remember that the pure taste of the water is Krishna (raso ‘ham)

Whatever we have actually belongs to Him. isavasyam idam sarvam (Isopanishad 1). He is the proprietor of the entire creation (sarva-loka-mahesvaram). He is the source of everything that exists (aham sarvasya prabhavah) and even a blade of grass cannot move without His sanction.

But Krishna does not demand so much. He says: If one offers Me with love and devotion a leaf, a flower, fruit or water, I will accept it. Whatever you do, whatever you eat, whatever you offer or give away, and whatever austerities you perform—do that as an offering to Me. (Bhagavad-gita 9.26-27)

3. The Piggy Bank Saved Me!

One of my friends said that on the day that followed the announcement on demonetisation of the 500 and 1000 rupee notes, he had to depend on the piggy bank of his daughter.

Even a hefty bank balance is of no use, because banks were closed and ATMs were out of cash. 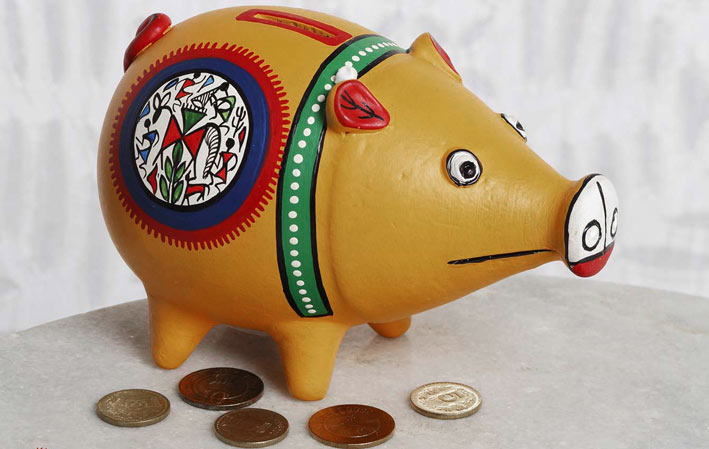 It was a crisis. But not a worse crisis compared to the moment of our death.

At any instant, we may get a notice from the Kingdom of Death…

“Now, leave everything and get out of this place.”

“No. You will not even get 4 seconds. You will not have time to say good bye to your near and dear ones. And, you cannot take anything with you.”

Everything is temporary in this material world: the money we earned, our bank balance, assets, educational qualification, friends and relatives.

mṛtyuḥ sarva-haraś cāham: (Bhagavad-gita 10.34) Krishna says that He is the all-devouring death. For those who do not believe in God, He appears in the form of death and takes away everything that they have accumulated.

None of your material accomplishments can save you.
Give up your thirst to amass wealth!
Be content with what you have!
This life is uncertain like the rain drops on a lotus leaf.

You waste your childhood in playing.
Youth is lost by attachment to woman.
Old age goes away thinking about the past.
Where do you have time to prepare for the inevitable death?

Do not get carried away by your wealth.
Do not take pride in your youth.
Do not boast about your friends and relatives.
Everything will be washed away.

Only one thing can save you:

Yes. Chant the holy names of the Lord. A slight endeavour in this direction can save you from the greatest danger. svalpam apy asya dharmasya trayate mahato bhayat (Bhagavad-gita 2.40)

Do not neglect this piggy bank. Fill it up as much as possible. It will help you in times of distress.

4. Make the Best Use of a Bad Bargain

Today we see that everyone is trying to get rid of 500 and 1000 rupee notes that were once treasured and regarded as a measure of one’s wealth as they are worthless now. There is  limited time. You may go to a bank and exchange it  or deposit it in your account.

Of course, if you deposit more than a limit you will be questioned about the source of it. And fake currencies will not be honoured.

We are living in a world of uncertainty. The material world is called jagat: means that which constantly changes. One may be leading a luxurious life like a king today; but tomorrow he might become a beggar on the street. Or it might be the other way round.

We may value something more than our lives, but sooner or later it  may lose its value.

We have got this human form, which is valuable but temporary. Even our body is changing every moment, but the change is not perceivable.

Today, we may have good health and energy. Our eyes have the power to see; our ears can hear; we can taste good food; we are able to walk and run; we are able to do a lot of things with our hands, and… we take it for granted. At any moment, these abilities can be taken away from us; making us worthless.

But the human form of life is meaningful because it gives us an opportunity to go beyond the mundane affairs of this material world.

Even the animals know how to manage the day-to-day transactional affairs of:

But in the human form, we have higher responsibilities. We cannot limit ourselves to satisfying the animal propensities. 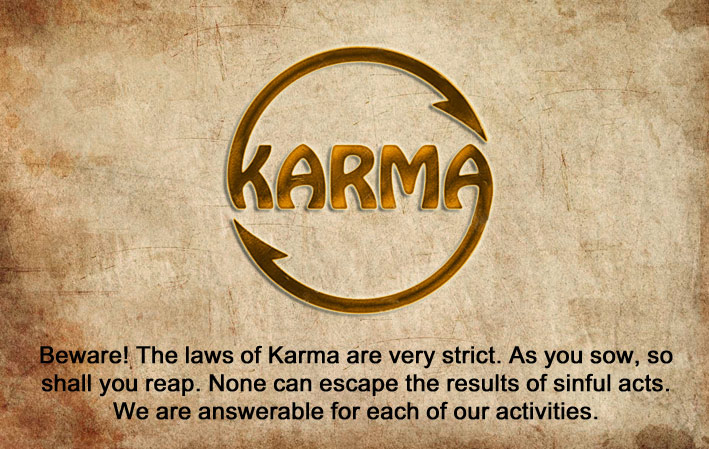 It is only in the human form, we can appreciate different forms of fine arts like drama, music, dance, poetry, painting, architecture, sculpture and many more. Our brains are more evolved. We are gifted with rationality, logic, conceptualization, abstraction and many more skills that are not well-developed in animals.

To be successful we have to maintain purity in our heart and deeds. Pretentious behaviour may get us cheap reputation from the innocent public but it will not last. There are no other shortcuts. We have to make sure that we do not live a fake life by possessing fake currency of pride, false prestige, dishonesty, hypocrisy, etc.

Beware! The laws of Karma are very strict. As you sow, so shall you reap. None can escape the results of sinful acts. We are answerable for each of our activities.

Ignorance is not an excuse. It is our duty to know how we must act in this material world to avoid being implicated by the laws of Karma.

We have limited time. We have to make the best use of a bad bargain. The scriptures insist that we must use this valuable form of human life for self-realization. This is our foremost duty.