The Supreme Lord and His Incarnations

Read this article on the various types of incarnations of the Supreme Lord Sri Krishna as well as Their purpose and pastimes. 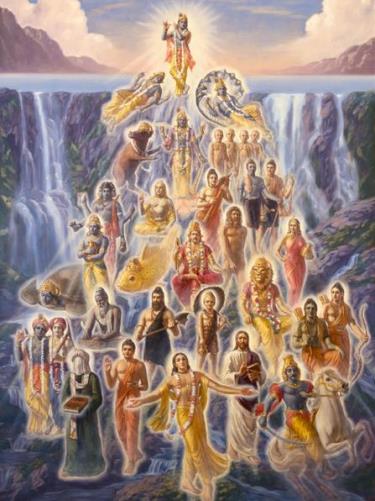 Brahma-saṁhitā informs us that the Supreme Lord Sri Krishna, who is absolute, infallible, and without beginning, expands Himself into unlimited forms: ananta-rūpam.

Sri Krishna has unlimited forms. Srimad Bhāgavatam compares the innumerable incarnations of the Lord to the rivulets flowing from inexhaustible sources of water.

avatārā hy asaṅkhyeyā: It is not possible to count. But they are all one. They are described as aṁśa-kalāḥ: plenary expansions or parts of the plenary expansions. Krishna is the fountainhead of all incarnations: ete cāṁśa-kalāḥ puṁsaḥ kṛṣṇas tu bhagavān svayaṁ

In the Chaitanya Charitamrita it is mentioned: ekale īśvara kṛṣṇa, āra saba bhṛtya: Krishna alone is the Supreme Personality of Godhead, and all others, not only the living entities, even the various other forms of Krishna are His servitors.

The various incarnations of the Lord appear in this material world with a very specific mission to accomplish. Their activities are extraordinary. No other human being can perform such activities.

The Lord is the inexhaustible source for innumerable incarnations which are distinguished by specific extraordinary feats which are impossible to be performed by any living being.

paritrāṇāya sādhūnāṁ vināśāya ca duṣkṛtām: The Lord appears in every millennium to protect His devotees. Lord Narasiṁha appeared to protect His devotee Prahlada. He also punishes demons like Hiranyakashipu who try to persecute His dear devotees. dharma-saṁsthāpanārthāya: In every millennium He appears to re-establish the religious principles. Sri Chaitanya Mahaprabhu appeared to establish the Kali-yuga dharma of chanting the Holy Names of the Lord.

As mentioned earlier, each and every incarnation of the Lord has a particular mission, and they are all described in the revealed scriptures. The Lord appeared as Matsya, Kūrma, Varāha, Narasiṁha, Vāmana, and many others: and every time He had a specific purpose or mission to execute.

Even the future incarnations of the Lord and the purpose of His advent are clearly mentioned in scriptures like Srimad Bhāgavatam. It is predicted that at the end of Kali-yuga, Lord Kalki will appear as the son of Vishnu Yasha, in the village of Shambala, to destroy the degraded, sinful men.

Sometimes the Lord empowers a particular living entity with a specific potency and the transcendental power of attorney to execute a specific mission. Such incarnations are called shaktyāvesha-avatāras (empowered incarnations). 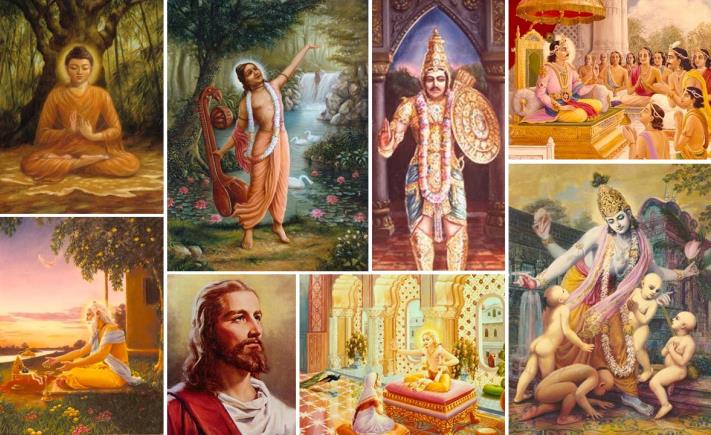 They appeared to reach the message of Godhead to people according to the time, place, and circumstances. Their mission was to lead people to God consciousness.

The four Kumāras preached the philosophical way of understanding the Absolute Truth. Kapila presented the sāṅkhya philosophy that describes the real nature of the soul. Nārada presented the science of devotional service (sātvata-tantra).

Vyāsadeva divided the one Veda into several branches and sub branches, so that the people of Kali Yuga, who are less intelligent, can take advantage of them.

Srila Prabhupada often mentioned that Jesus Christ was also an empowered incarnation of the Lord.  They spoke as much about religion as can be understood by their audience.

When materialism was rampant and materialists were using the pretext of Vedic authority to kill animals in sacrifice, Lord Buddha appeared to stop the nonsense and establish the principles of nonviolence. He even asked them to reject the Vedas.

Note: Srila Prabhupada, the founder-acharya of the International Society for Krishna Consciousness (ISKCON), who took up the mission of spreading the yuga-dharma of chanting the Holy Names of the Lord and preached the message of Bhagavad-gita and Srimad Bhagavatam by traveling around the globe, is also an empowered incarnation of the Lord. Sri Chaitanya Mahaprabhu proclaimed that unless empowered by Krishna, one cannot propagate the saṅkīrtana movement. kṛṣṇa-śakti vinā nahe tāra pravartana. On the authority of this statement we can understand the special and unique position of Srila Prabhupada.

The Lord also appears in the form of archa-vigraha: the worshipable Deity. The Deity is made of material elements like clay, stone, metal or wood, but there is no material contamination. The form of the Lord is spiritual. Why did He appear in the archa form? What was His mission? 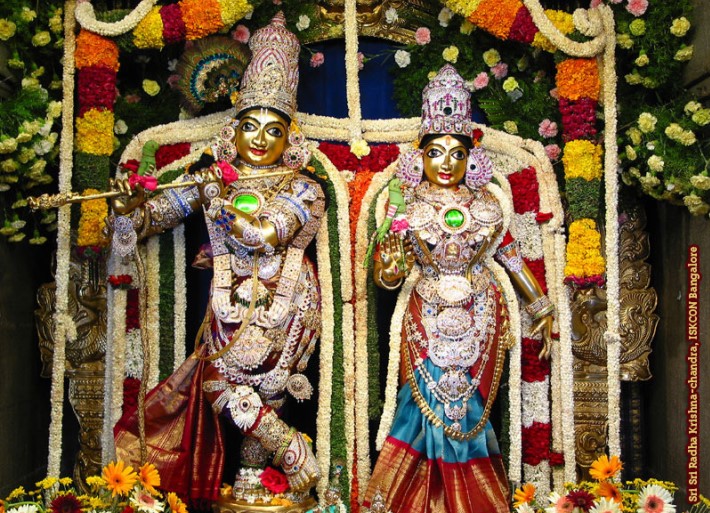 It is an opportunity for us to serve Him. We can see Him in that form (darśana) and meditate on Him (dhyāna); we can cook food and offer to Him (naivedya); we can bathe Him (abhiśeka) we can dress Him up with fine clothes and jewelry (śṛṅgāra); we can offer ārati; we can offer our prayers (vandana).

The Lord accepts our service through the arca-vigraha and fully reciprocates our devotion. There are various instances where the Deity has openly reciprocated the love of His devotees.

We can engage all our senses in the service of the Lord and thus, purify ourselves from material contamination and make rapid progress in our spiritual life. 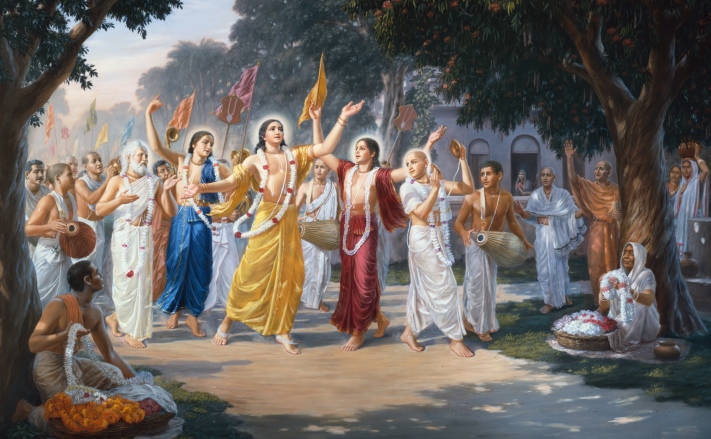 kali-kāle nāma-rūpe kṛṣṇa-avatāra: Krishna descends in this Kali-yuga in the form of His holy name. Sri Chaitanya Mahaprabhu says: nāmnām akāri bahudhā nija-sarva-śaktiḥ tatrārpitā: there are innumerable names of the Supreme Lord invested with all His potencies. abhinnatvān nāma-nāminoḥ: Krishna and Krishna’s names are identical. There is no difference.  aniyamitaḥ smaraṇe na kālaḥ. There are no hard and fast rules. We can chant at any time.

What is the purpose of His descent? He appeared in the form of Holy Name to deliver us; to lift us out of ignorance and take us back to Godhead.

What are the pastimes of Nama-avatāra?

ceto-darpaṇa-mārjanaṁ: This is the first effect. As we chant the Holy Name, our heart is cleansed of material contamination and thus our existence is purified.

Srila Prabhupada went to the United States, a foreign land, where no one knew about Krishna. No one was interested in spiritual life. Materialism was rampant in the western civilization.

Srila Prabhupada chanted in the parks and invited them for attending the lectures on Bhagavad-gita. He asked them to chant and distributed prasadam. As they started chanting, gradually their hearts got cleansed and they started understanding the philosophy of Krishna consciousness.

bhava-mahā-dāvāgni-nirvāpaṇaṁ: the blazing fire of material existence is immediately extinguished. This material world is compared to dāvāgni: forest fire. No one wants fire; but in the forest, sometimes, there is fire automatically due to the cohesion of bamboos. Similarly in this material world, no one wants disease or distress; but we constantly suffer. The only solution is to take shelter of the Holy Name.

ānandāmbudhi-vardhanaṁ: The chanting of the Holy Name of Krishna expands the blissful ocean of transcendental life. If our aim is to get material benefit, the Holy Names will reciprocate. But that is not our goal. The ultimate goal is to liberate ourselves from this material tabernacle and live an eternal life in bliss and knowledge with the Personality of Godhead. We have to purify ourselves by the association of the Holy Name and make ourselves eligible for serving the Lord in His own abode.