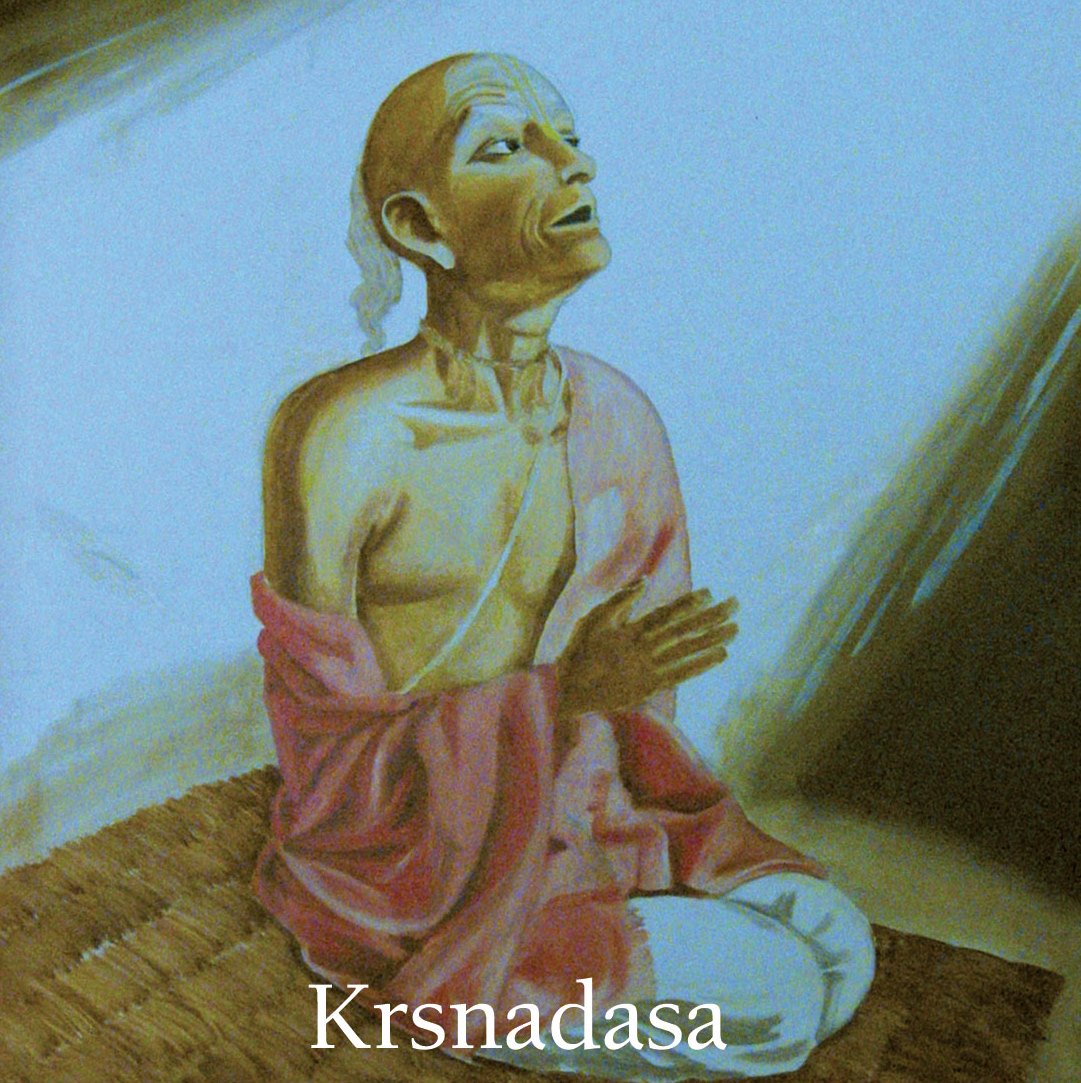 Sri Krishna Dasa Kaviraja Gosvami was born in a Nadiya family of physicians at the village of Jhamatpur, in the district of Barddhaman, near Naihati. His father was Sri Bhagiratha, and his mother was Sri Sunanda. The deity of Gaura-Nityananda installed by Sri Kaviraja Gosvami is still being worshiped there.

In Chaitanya Charitamrita, Adi-lila chapter five, Sri Kaviraja relates the cause of his leaving family life: “Lord Nityananda Prabhu had a servant named Sri Minaketana Ramadasa, who was a reservoir of love. At my house there was sankirtana day and night, and therefore he visited. Whenever Minaketana shouted aloud the name Nityananda, the people around him were filled with great wonder and astonishment. One brahmana named Sri Gunarnava Mishra was serving the Deity. When Minaketana was seated in the yard, this brahmana did not offer him respect. Seeing this, Sri Ramadasa became angry and spoke. ‘Here I find the second Romaharshana suta, who did not stand to show honor when he saw Lord Balarama.’ “At the end of the festival, Minaketana Ramadasa went away, offering his blessings to everyone. At that time he had some controversy with my brother. My brother had firm faith in Lord Chaitanya but only a dim glimmer of faith in Lord Nityananda.

Knowing this, Sri Ramadasa felt unhappy in his mind. I then rebuked my brother. “‘These two brothers,’ I told him, ‘are like one body; They are identical manifestations. If you do not believe in Lord Nityananda, you will fall down. If you have faith in one but disrespect the other, your logic is like the logic of accepting half a hen.

It would be better to be an atheist by slighting both brothers than a hypocrite by believing in one and slighting the other. Thus Sri Ramadasa broke his flute in anger and went away, and at that time my brother fell down. “That night, because He was pleased with the chastisement that Krishnadasa gave his brother for offending His dear devotee Minaketana Ramadasa, Lord Nityananda appeared in his dreams and declared: Are are krsnadasa, na karaha bhaya, vrndavana yaha, tanha sarva larya haya “O my dear Krishnadasa, do not be afraid. Go to Vrindavana, for there you will attain all things.” [C.C. Adi 5.195]

Thus receiving the mercy of Lord Nityananda in his dream, he started for Vrindavana with a joyful mind. The lotus feet of the spiritual master of Sri Kaviraja are none other than those of Lord Nityananda Himself. He accepted the Gosvamis – Sri Rupa, Sri Sanatana, Sri Jiva, Sri Raghunatha, Sri Raghunatha Bhatta and Sri Gopala Bhatta as his instructing spiritual masters. From Sri Lokanatha Gosvami and Sri Raghunatha Bhatta Gosvami he begged permission to write Sri Chaitanya Charitamrita. Sri Krishnadasa Kaviraja Gosvami compiled the following books: Sri Govinda lilamrita, Krishna karnamrita and Sri Chaitanya Charitamrita.