Srila Prabhupada, in a lecture on Bhagavad-gita, explains how all our relationships in this material world – either as master and servant, or as friends, or as parents and child, or as husband and wife, or a lover and the beloved, etc. are the perverted reflections of our eternal relationship with God. When one attains that platform of knowledge, one takes up the service of the Lord – Krishna consciousness. We all have got our eternal love relationships with Krishna and there is no question of remuneration for our service. Of course, remuneration is there a thousand times more than that in the material world. This is illustrated in the Eighth Canto of Srimad-Bhagavatam, with the example of a great devotee – Bali Maharaja.

Piousness: Maharaja Bali was the grandson of the great devotee Prahlada who instilled in Bali, a strong sense of dharma, values and most importantly, devotional service to the Supreme Lord. With such an upbringing, Bali Maharaja grew up to be very pious, contrary to the expected behaviour of others in his asura (demonic) clan. His reign as the king of the asuras was characterised by peace, tranquillity and prosperity. Even demigods like Indra became envious of Maharaja Bali. 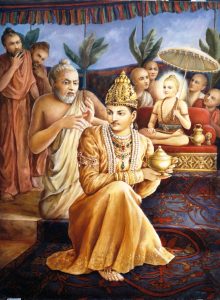 Truthfulness: Lord Vamanadeva, then with His two steps, covered the entire universe and asked Bali Maharaja, where to keep the third step. Meanwhile, his soldiers were all defeated by the associates of the Supreme Lord and Bali was bound with ropes of Varuna. Now Bali Maharaja had lost his original position, bereft of his riches, defeated and arrested, suffering the pain of being bound, also rebuked and cursed by his spiritual master. In spite of all this, he was fixed in his vow and did not give up his truthfulness.

Complete Surrender (Atma-nivedanam): Although Bali Maharaja was the ruler of the entire universe, he at once surrendered and was very glad to receive the Lord’s remaining step upon his head, and thus he was blessed by the Lord’s becoming his constant companion and doorman. So, by giving everything to the cause of the Lord, one does not lose anything, but he gains everything that he could never otherwise expect.

Mahajana: Bali Maharaja became successful by offering all he possessed to Lord Vamanadeva and thus he is glorified in the Srimad-Bhagavatam as one of the twelve mahajanas or great authorities in the devotional line, namely Brahma, Narada, Shiva, Kumara, Kapila, Manu, Prahlada, Bhisma, Janaka, Shukadeva Goswami, Bali Maharaja and Yamaraja.

Bali Maharaj knew that one who does not properly give a needy, what he has promised, would be defamed for life for deviation from the truth. As he was very much afraid of this, he went ahead and offered his head in charity as the place for Vishnu’s third step, offering prayers for the Lord’s mercy.

Bali Maharaja prayed – “O best Personality of Godhead, most worshipable for all the demigods if You think that my promise has become false, I shall certainly rectify matters to make it truthful. I cannot allow my promise to be false. I do not fear being deprived of all my possessions, living in hellish life, being arrested for poverty by the ropes of Varuna or being punished by You as much as I fear defamation. Although a father, mother, brother or friend may sometimes punish one as a well-wisher, they never punish their subordinate like this. But because You are the most worshipable Lord, I regard the punishment You have given me as most exalted.”

The Lord, pleased with the great tolerance displayed by Bali Maharaj, gave him a place not obtainable even by the demigods. Bali Maharaj was asked to live on the planet Sutala, especially protected by the Lord Himself.

Bali Maharaja was ecstatic knowing that the respectful obeisance he offered was as successful as those of pure devotees. The causeless mercy he received from the Lord was never achieved even by the demigods or the leaders of the various planets.

Srila Prabhupada, in Nectar of Devotion, mentions how Lord Krishna glorified Bali Maharaja while talking to His friend Uddhava, “My dear friend, how can I express the glorious characteristics of Bali Maharaja, the son of Virochana? Although the King of the demigods was cursed by this son of Virochana, and although I cheated him in My incarnation as Vamana, taking away his dominions throughout the universe, and although I still criticized him for not fulfilling his promise, I have just now seen him in his kingdom, and he feelingly expressed his love for Me.”

The glorious qualities of Maharaja Bali raised him to the exalted position of a Mahajana. By following such a Mahajana, one can make advancement on the path of Krishna Consciousness.