The Supreme Lord appeared as the son of Kashyapa and Aditi in the form of a dwarf Brahmana (Vamana) to deliver Bali Maharaja, a great devotee born in the family of demons.

O Kesava! O Lord of the universe! O Lord Hari, who have assumed the form of a dwarf-brahmana! All glories to You! O wonderful dwarf, by Your massive steps You deceive King Bali, and by the Ganges water that has emanated from the nails of Your lotus feet; You deliver all living beings within this world.

This year ISKCON Bangalore is celebrating Vamana Dvadashi – the appearance day of Lord Vamanadeva on September 10, 2019. The Deity of Lord Sri Krishna is decorated as Vamanadeva wearing a saffron robe and holding a staff, an umbrella and a water pot (kamandalu). Since we have to break the Ekadashi fast on the day of Dvadashi, the Vamana Dvadashi fasting till noon is done on the previous day (Ekadashi). 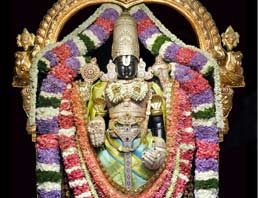