ISKCON Bangalore celebrated Srila Prabhupada Sannyasa Smriti on September 27, 2015 – a ceremony to commemorate his acceptance of sannyasa diksha. His Divine Grace had accepted sannyasa on this day in the year 1959.

The Governing Body Council of ISKCON Bangalore group of temples recently passed a resolution that a few more occasions should be observed to increase the remembrance of Srila Prabhupada throughout the year, based on important events in his life. Srila Prabhupada Sannyasa Smriti is one of such events.

A team of devotees from Bengaluru gathered information from the followers of Sri Madhvacharya, Sri Ramanujacharya and Sri Shankaracharya about the traditions on how they observe the day on which their acharya accepted sannyasa and arrived at a procedure.

The ceremony started with Sri Madhu Pandit Dasa, Temple President reading out some passages about the pre-sannyasa period of Srila Prabhupada; what led him to take sannyasa, the actual event of sannyasa diksha and the days following this event. These details were compiled from books written by the disciples of Srila Prabhupada and from recollections by some of his god brothers.

Books by His Divine Grace in different languages were on display on this occasion.

Later, an arati was performed to Srila Prabhupada while the assembled devotees sang ‘Gurudeva! Kripa bindu diya’, a song by Srila Bhaktivinoda Thakura. The pastime of Srila Prabhupada’s acceptance of sannyasa diksha was remembered on the occasion. Devotees performed Guru Puja to the accompaniment of Srila Bhaktivinoda Thakura’s ‘Gurudeva! Kripa bindu diya’ song. The books of Srila Prabhupada which were displayed in front his altar included copies of Bhagavad-gita As It Is in 36 languages. 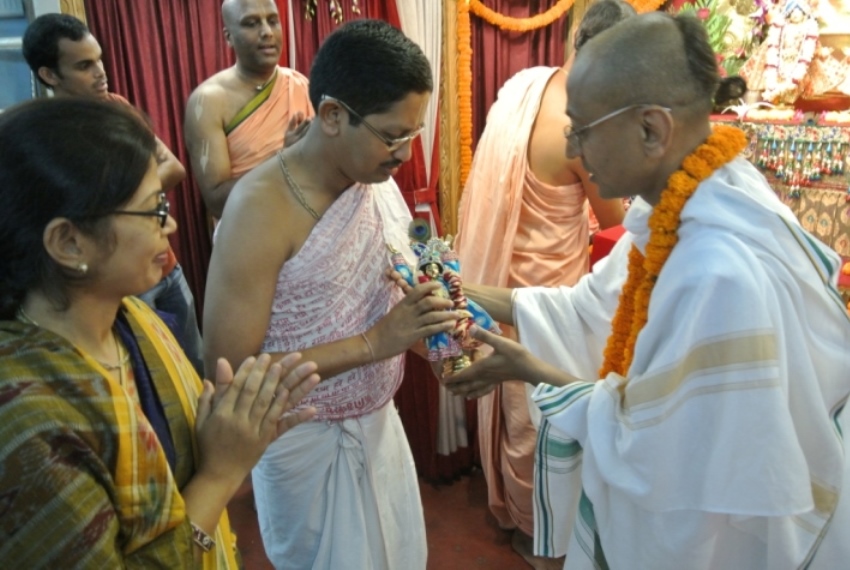 On the occasion of Srila Prabhupada Sannyasa Smriti, Sri Chanchalapathi Dasa, Senior Vice President of ISKCON Bangalore gave an enlightening discourse on Srila Prabhupada’s biography. After the discourse, some of the devotees who attend the Krishna Ashraya program conducted by the temple had the great fortune of receiving the Deities of Sri Sri Nitai Gauranga from Sri Chanchalapathi Dasa. These devotees chant 16 rounds of Hare Krishna mantra every day and had expressed their desire to perform Deity worship at home. Now many other Krishna Ashraya devotees feel inspired and want to worship these Deities at home. 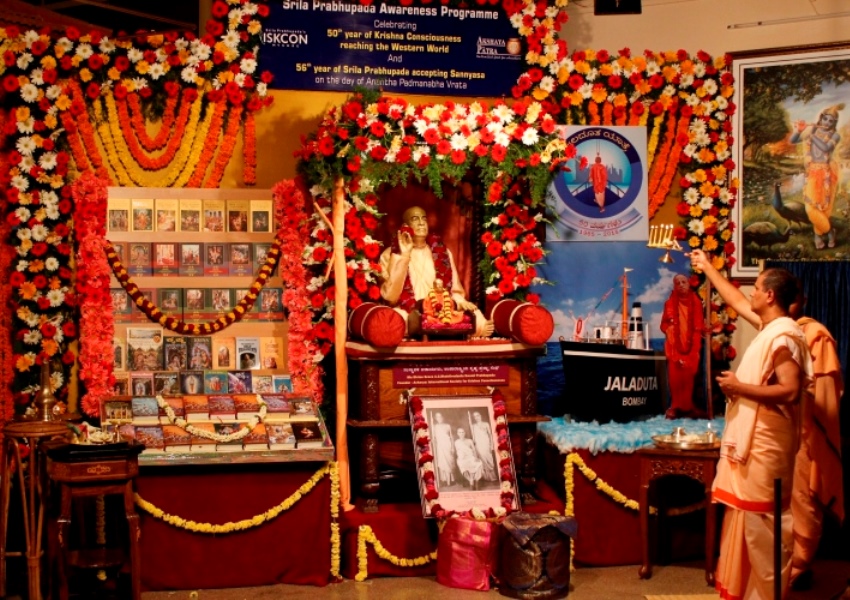 The celebration commenced at 6:30 p.m. with a grand pallakki utsava of Srila Prabhupada followed by Guru Puja. Devotees had displayed the books written by Srila Prabhupada and a special arati was performed to these holy books, as they are the literary incarnation of the Supreme Lord.

Srila Prabhupada is widely regarded as the foremost Vedic scholar, a cultural ambassador, a prolific author and a spiritual teacher of the modern era. He is especially respected as the world’s most prominent contemporary authority on bhakti-yoga, devotional service to the Supreme Lord Krishna, as taught by the ancient Vedic writings of India.

Srila Prabhupada translated and commented in over eighty volumes of books, including the Bhagavad-gita As It Is, a concise handbook for understanding the purpose and goal of human life and the multi-volume Srimad-Bhagavatam, an epic biography of Lord Krishna, His incarnations, and His many devotees throughout the history of the universe.

Having met his spiritual master, Srila Bhaktisiddhanta Saraswati Thakura in 1922, Srila Prabhupada struggled within India to carry out his guru’s order for over 40 years, while maintaining family and business responsibilities. Later, at the age of sixty-nine, with forty rupees and a trunk of his Bhagavatam commentaries, Srila Prabhupada boarded a steamship bound to New York City in 1965. After a great struggle for a year, Srila Prabhupada incorporated the International Society for Krishna Consciousness (ISKCON) at New York in 1966 which later became a worldwide movement.

While speaking on the occasion, Sri Jai Chaitanya Dasa, President, ISKCON Mysore presented a short life-sketch of Srila Prabhupada and said, “By introducing the great chant of deliverance, Hare Krishna Hare Krishna Krishna Krishna Hare Hare, Hare Rama Hare Rama Rama Rama Hare Hare, Srila Prabhupada brought an immense revolution in the hearts of many around the world and made people realize their true spiritual nature as an eternal soul belonging to the Supreme Lord Krishna, and derive unending pleasure in associating with Him through this great chanting.”

“His books are translated into more than 87 languages and over 500 million copies of them have been distributed. These authorized Vedic texts contain down-to-earth presentations of the most complex spiritual subject matters. These books are still continuing to transform countless lives all over the world,” said Sri Jai Chaitanya Dasa.

Join hands with us in spreading the knowledge of Bhagavad-gita. Contribute towards distributing copies of this literature at a discount.

When A.C. Bhaktivedanta Swami Srila Prabhupada entered the port of New York City on 17 September 1965, few Americans took notice – but he was not merely another immigrant. He was on a...