New Delhi-12 April, 2016: The presentation ceremony of the prestigious Padma Shri was held in the historic Durbar Hall of the Rashtrapati Bhavan at 11:30 am on Tuesday. Continuing the tradition, the Hon’ble President of India Shri Pranab Mukherjee conferred the Padma Shri on Madhu Pandit Dasa, Chairman of The Akshaya Patra Foundation. At the ceremony, illustrious personalities recognized for contributions in varied fields were also present.

Sri Madhu Pandit Dasa was honoured with the recognition for the distinguished service rendered by Akshaya Patra for the children of India. On the occasion, he thanked the Government of India for the recognition. With regard to the honour, he said, “I dedicate this award to Srila Prabhupada, a true visionary who wanted to see a hunger free world. This recognition shall give immense encouragement to the Akshaya Patra team to reach greater heights. It is our humble service of providing nutrition to the government school children through the Akshaya Patra programme. It is an inspiration for me and the entire team at Akshaya Patra to reach out to many more hungry children of this country. Quality food for these children is essential for quality education that will in turn create citizens who can think for themselves and help develop good character.” 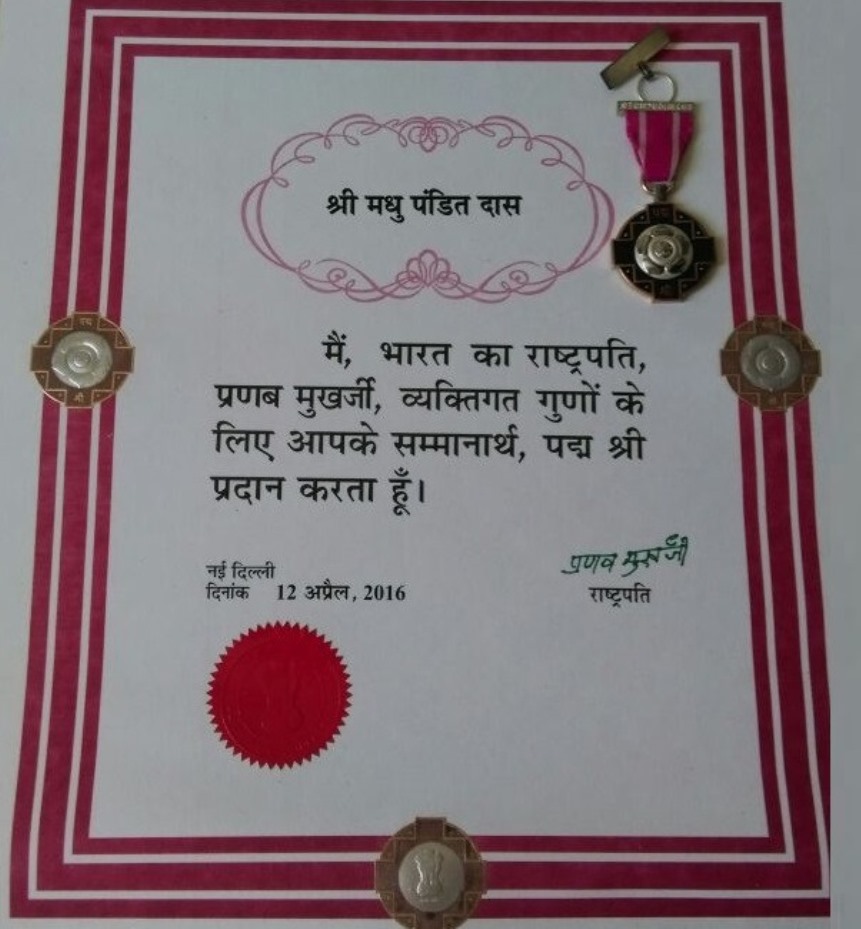 Madhu Pandit Dasa designed the first centralized kitchen of Akshaya Patra, to provide mid-day meals to underserved children in the Government schools of Bengaluru rural district during July 2000. Under his inspiring leadership and impeccable commitment, the organization grew unceasingly towards its mission of feeding ‘5 million children by 2020.’

Akshaya Patra partners with the Ministry of Human Resource Development, Government of India and various State Governments as one of the most admired Public Private Partnerships in education and child welfare. Scientific studies conducted by leading research organizations such as A. C Nielsen and Sigma clearly established the positive impact of its mid-day meal programme.

Madhu Pandit Dasa set up a robust Governance Model that has made Akshaya Patra a hallmark of transparency and accountability. This is highlighted by the fact that Akshaya Patra is the only NGO in the country to win the Institute of Chartered Accountants of India (ICAI) Gold Shield Award for Excellence in Financial Reporting five times in a row and placed in its prestigious Hall of Fame.

Under his leadership, Akshaya Patra has grown from providing 1500 children with mid-day meals to 1.5 million children in 15 years, becoming the world’s largest NGO-run school lunch programme. A Harvard case study, the Foundation has recently served the two billionth meal.

Madhu Pandit Dasa has completed his B.Tech in Civil Engineering from IIT-Mumbai in the year 1980. While he was doing his M.Tech course in IIT-Mumbai in 1981, he dedicated himself to the service of humanity by becoming a full-time member of ISKCON. Apart from being the Chairman of Akshaya Patra, he also serves as the President of ISKCON Bangalore and Chairman of Vrindavana Chandrodaya Mandir.

In partnership with the Government of India and various State Governments and inestimable support from many philanthropic donors and well-wishers; Akshaya Patra has grown from humble beginnings serving just 1,500 school children across 5 schools. Today, Akshaya Patra Foundation is the world’s largest (not-for-profit) run Mid-Day Meal Programme serving wholesome food to over 1.5 million children from 11,360 schools across 10 states in India.

Join hands with us in spreading the knowledge of Bhagavad-gita. Contribute towards distributing copies of this literature at a discount.