Madhu Pandit Dasa was born in 1956 in Thiruvananthapuram, Kerala. He became a full-time member of ISKCON while doing his M.Tech. course in IIT-Bombay in 1981. The Sri Radha Krishna Temple in Bengaluru was designed and built under his guidance. He was awarded the Padma Shri in 2016 in recognition of the outstanding services rendered by the Akshaya Patra program initiated by him across India. Currently, he is directing the Vrindavana Chandrodaya Mandir project in Vrindavana, Uttar Pradesh. Read more

Sri Chanchalapathi Dasa was born in 1963 in Bengaluru, India. He did his Masters Programme in Electrical Communication Engineering from the Indian Institute of Science, Bangalore and joined ISKCON Bangalore in 1984 as a full-time member. He has been involved in the implementation of various programs of ISKCON Bangalore as well as the Akshaya Patra program. He is also actively involved in the execution of the Vrindavana Chandrodaya Mandir project in Vrindavana, Uttar Pradesh. Read more

Sri Jai Chaitanya Dasa was born in 1966 in Kerala, India. He came in touch with the teachings of Srila Prabhupada while pursuing his undergraduate course in Commerce at the Mahatma Gandhi College, Trivandrum. He joined the Hare Krishna Movement in 1984. He was a pioneer in ISKCON Bangalore’s organic farming and rural development programs. Currently, he is serving as the Temple President of ISKCON Mysore and heading its activities.

His Holiness Stoka Krishna Swami was born in 1960 in Mysuru, India. He completed his Bachelor of Electrical Engineering from REC Nagpur. He worked as a lecturer in Malnad College of Engineering, Hassan. He also served in Infosys Technologies Ltd. and Tata Boroughs Ltd. He joined ISKCON in 1989. Having headed the activities of ISKCON centers at Mysuru and Chennai, he is currently involved in training and counseling full-time missionaries at ISKCON Bangalore. Read more

Sri Amitasana Dasa was born in 1969 in Namrup, Assam, India. He completed B. Tech. in Computer Science from REC Kurukshetra, later worked in Kirloskar Computer Services, Bengaluru as a Software Engineer and then joined ISKCON Bangalore in 1992. He heads the extension center of ISKCON Bangalore at Whitefield. He has been involved in organizing youth programs of the temple such as seminars and workshops for self-development on the basis of spiritual principles. Read more

Sri Vasudev Keshav Dasa was born in 1973 in Kolkata, India. He studied B. Tech. in Electronics and Communication Engineering from REC Warangal, worked in Wipro Systems, Bengaluru as a Systems Engineer and then joined ISKCON, Bangalore in 1998. He takes care of various services and projects related to the Deity department and the temple festivals. He is also the Director of NIVE (National Institute of Value Education) which imparts value education to students. Read more

Sri Rajiv Lochan Dasa was born in 1972 in Sonipat, Haryana, India. He studied B.Sc. at St. Joseph’s College, Bengaluru. He joined ISKCON Bangalore in December 1993. He is known for leading ecstatic kirtans and delivering inspiring lectures on Bhagavad-gita and Srimad Bhagavatam. He is also currently serving as Zonal Secretary of the Governing Body Committee, Hare Krishna Movement and Temple President, ISKCON Hubli. He is also the President of Akshaya Patra Foundation in Hubli.

Sri Satya Gaura Chandra Dasa was born in 1972 in Rajahmundry, India. He studied M.Tech. in Computer Science from IIT Chennai. He worked in Novell Software as a Senior Software Engineer and then joined ISKCON Bangalore in 1997. Currently, he is serving as the President of Hare Krishna Movement, Hyderabad. He is also overseeing the Akshaya Patra operations in the states of Telangana and Andhra Pradesh. 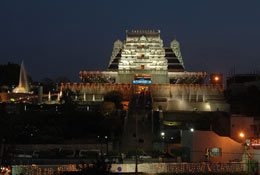