Lord Nityananda saves Jagai and Madhai from the Sudarshana chakra invoked by Lord Chaitanya. The play ends with a grand kirtana. The kirtana is heard feebly in the background. Jagai and Madhai are completely drunk; they enter the stage and walk towards the bathing ghat. Each of them holds a liquor pot in their hands. The sound of the flowing river, cool breeze and the chirping insects can be heard in the background.

They are so intoxicated that they are oblivious that what is going on in the background is hari-kirtana. They lift their hands and dance in an awkward way imitating the devotees. 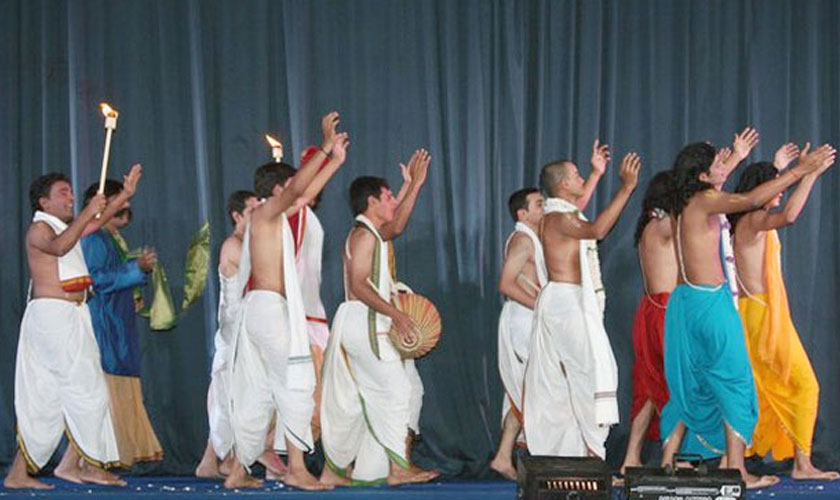 Both of them laugh loudly and fall on the ground and roll. By this time, the other devotees including Haridasa Thakura reach there.

On hearing this, in an unexpected moment, Madhai picks up a broken earthen pot near the shop and throws it at Nityananda Prabhu. The pot strikes Nityananda on the forehead, and he starts bleeding. Mukunda comes forward and holds Nityananda and signals the other devotee to go and inform this to Lord Chaitanya. 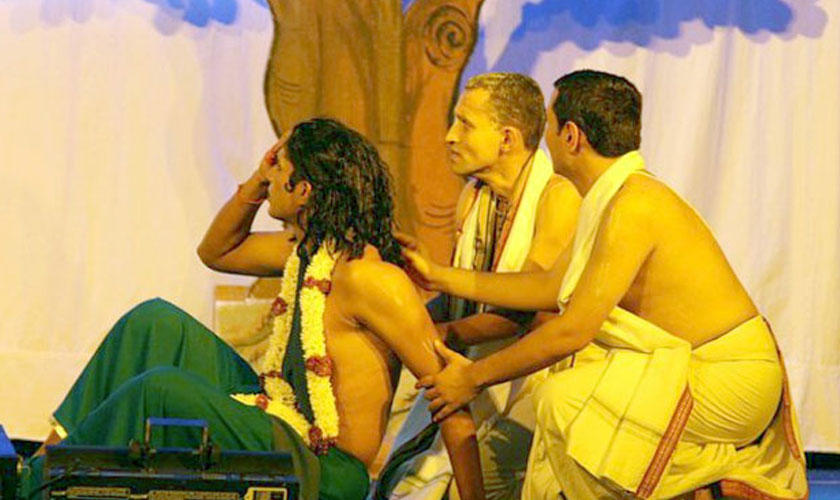 Madhai tries to take one more piece of the broken pot and with that runs towards Nityananda for another assault. Jagai, shocked at what his brother had done, realizes the situation, gets up and holds Madhai from further attacking Nityananda.

Madhai takes another broken piece of the earthen pot and runs towards Nityananda. Jagai holds Madhai and shouts…

Lord Chaitanya appears on the scene followed by many devotees.

A loud roar in the sky. A reddish hue spreads everywhere. The temperature shoots up. Everyone is feeling the heat as if the entire place is on fire. Sudarshana appears. (Lord Chaitanya is not convinced and He is still angry.) Both Jagai and Madhai run towards Nityananda and fall at his feet; Sudarshana goes back; Nityananda embraces them. Narada starts chanting the Hare Krishna mantra. As soon as he does so, there was a slight movement from Yamaraja.

Narada, playing on his vina, continues singing. Yama-kinkaras ask the audience to join the kirtana to help Yamaraja to recover. Yamaraja regains his consciousness and also joins the kirtana.

Lord Brahma enters seated on his swan carrier surrounded by Kashyapa Muni, Kardama Muni, Prajapati Daksha, Manu and Bhrigu Muni (who chants Vedic mantras). He also joins the kirtana. Lord Shiva enters doing ananda tandava (kirtan stops; all the demigods watch the dance of Lord Shiva) Lord Shiva stops his tandava and sings the Hare Krishna mantra; all of them together sing in great joy. All of them glorify and shower flowers on Lord Chaitanya and Lord Nityananda.

Sri Chaitanya Mahaprabhu is none other than the Supreme Lord Krishna in His most munificent mood, who appeared to demonstrate how the yuga dharma of this age of Kali, harinama sankirtana, can be practiced to full effect so that we can transform our lives and transcend the ill effects of this age. Though we are completely unqualified, by Lord Chaitanya’s mercy we can return to the spiritual world simply by following His instruction of chanting the Hare Krishna maha mantra.

The glories of Gaurahari are the sublime essence of nectar, far beyond the reach of the Vedas. Srila Vrindavana dasa Thakura, the author of Sri Chaitanya-bhagavata assures that simply by hearing this pastime of the deliverance of Jagai and Madhai, one will obtain prema bhakti at the lotus feet of Krishna.

Synopsis of the Play

Srimad-Bhagavatam predicts the appearance of Lord Chaitanya Mahaprabhu, the Golden Avatara, the incarnation of God who will propagate the yuga dharma for this age of Kali, which is harinama sankirtana or the congregational chanting of the holy names of Lord Krishna, specifically the Hare Krishna mahamantra, to overcome the miseries of this age of hypocrisy and quarrel.

Accompanied by His dearest associates, Lord Nityananda, Advaita Acharya, Gadadhara Pandita, Srivasa Pandita, Haridasa Thakura, Mukunda Datta, Vasudeva Datta, Vakreshvara and many others, Lord Chaitanya looks like a jewel while He dances and sings the holy names of the Lord through the streets of Navadvipa. The visitors from Yamapuri are transcendentally thrilled to see this and also the chanting of Sri Chaitanya and Nityananda in the courtyard of Srivasa Pandita. Later, Lord Chaitanya encourages His associates to preach His message everywhere. He orders Lord Nityananda and Haridasa Thakura to go door to door and request everyone to chant the holy names of Krishna.

Haridasa Thakura and Nityananda who are preaching together, encounter the fallen brahmana brothers, Jagai and Madhai. The two debauchees are drunk and attempt to assault the devotees, who manage to escape somehow. This news reaches Lord Chaitanya and He is enraged. But Lord Nityananda pacifies Him.

Soon Lord Nityananda is back preaching and encounters Jagai and Madhai again. In his drunken fury, Madhai attacks Nityananda with a pot and wounds Him. This time, the brothers cannot get away, as Lord Chaitanya Himself rushes there to punish them. He invokes the Sudarshana chakra, His divine weapon, to kill the two sinful brothers.

Pleading to show His mercy on the two, Lord Nityananda reminds Lord Chaitanya that He has appeared not to kill the sinners but to kill their demonic mentality. Lord Chaitanya spares their lives on the condition that they will not sin again. Seeing the deep compassion of the Supreme Lord, Yamaraja reacts in ecstasy. Other demigods also arrive to glorify Lord Chaitanya in a resounding kirtana.