Carry the Lord in your heart with great zeal

A talk by Sri Chanchalapathi dasa on Vaikuntha Ekadashi. Read to know how to make every situation pleasant in the material world.

It is said in the Srimad-Bhagavatam that there are three important aspects of our interaction in this material world. We interact with our words, thoughts and our senses.

Sometimes what we say, what we think and what we act may not be very pleasant and may not create a pleasant situation for others and for ourselves. In the Srimad-Bhagavatam (2.6.34), there is a conversation between Lord Brahma and his son Narada.  Lord Brahma says:

How does he do this? He says: It is possible because I carry Lord Hari in my heart with great zeal.

So we have to carry the Lord in our heart with great zeal (utkanthyavata) and with great enthusiasm; not officially or ritualistically without heart and without application of our mind and intelligence.

How do we know that we are carrying the Lord in our heart with great zeal?

If we carry the Lord in our heart with great zeal then we will be prepared to do any kind of sacrifice for the pleasure of the Lord. That is the indication that we are very serious and earnest about it.

And when we carry the Lord in our heart by following His instructions, by remembering Him always, chanting His holy name, worshiping Him, we can ensure that:

Great devotees and acharyas like Srila Prabhupada always carry the Lord in their hearts. So their words never fail; their thoughts always bring auspiciousness and their actions never fail. Such great devotees and acharyas come to this world to teach us about the science of God, about the love of God and to teach us how to intensify our love for God. Srila Prabhupada wrote several books; primarily related to three important categories:

Prabhupada wanted us to study and be absorbed in these kinds of literature all our life.

There were some occasions that some of Srila Prabhupada’s disciples, in their interactions with him, saw something very remarkable in him as he always carried the Lord in his heart.

Once, Srila Prabhupada was in Montreal conducting an initiation (diksha) ceremony.

When a disciple takes initiation from the spiritual master his name is changed. It is the second birth for the disciple.

Our first birth is from our biological father and mother. In the second birth, the spiritual master is considered our father and the Vedic literatures are our mother.

After one takes initiation, one will be under the protection of his divine father and mother. Hence in our Vedic tradition, a new name is given to one who takes initiation in diksha ceremony, because it is supposed to mean a new life. 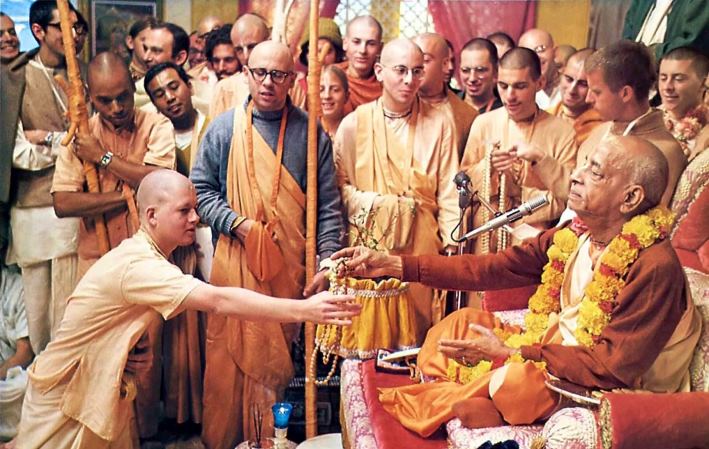 After initiation, one’s thinking, perspective of life, etc., is supposed to change on the basis of Vedic knowledge and the direction from the spiritual master.

In the initiation ceremony, Prabhupada would sit on the asana, take the beads and chant 108 times on the beads, and give it to the disciple. The ceremony would go on for a few hours.

One who is going to be initiated is not supposed to ask his spiritual master for a particular name. One should be happy with whatever name one receives from him. But this devotee had a desire. For many days he was meditating that he was going to take diksha and that hopefully Prabhupada would give him the name – Madan Gopal.

So he sat and he was praying within himself to Prabhupada for that name. Prabhupada kept chanting the Hare Krishna mantra.

Towards the end Prabhupada grabbed the mala and said, “So your name will be …” He paused, turned to his secretary next to him and said, “Have I given a name Madan Gopal to anyone?”

The secretary had a list of names. He looked through the papers and said, “Yes Srila Prabhupada, you have already given the name.” So Prabhupada turned to the disciple who was anxiously waiting, handed him the mala and said, “So your name will be Bharadraj Dasa.”

There was another occasion when Srila Prabhupada was in London. There were a few English devotees with him.

One sannyasi from India came to meet Srila Prabhupada. Prabhupada very respectfully received him and asked his disciples to bring a plate of fruits which was then offered to him.

The sannyasi and Srila Prabhupada were talking in Hindi. The devotees didn’t know what they were talking about.

Suddenly Srila Prabhupada made a statement, “No. My disciples also know Sanskrit. They are also learning Sanskrit.”

Then he turned to the devotee who brought the plate full of fruits and said “Can you chant some Isopanishad verses?”

That devotee was chanting the Isopanishad for the last few months or so. He was practicing how to chant the verses. But he had learnt how to chant only the first six verses. He didn’t know beyond six verses.

The devotee said, “Yes, Srila Prabhupada,” and he started chanting.

After chanting the first verse, he looked at Prabhupada and Prabhupada said, “Continue.”

Then he chanted the second verse, looking at Srila Prabhupada if he was going to make any sign. Prabhupada was closing his eyes and nodding and listening to his disciple chant.

The sannyasi was watching in amazement that a westerner is chanting Sanskrit verses.

When the devotee came to the fifth verse, he didn’t know what to say.

He was full of anxiety and looking at Srila Prabhupada quite intently. Then he came to the sixth verse. He thought, “What is going to happen? My situation is almost like Draupadi’s situation… I am going to be disrobed.”

Thus the words, thoughts and actions of great devotees are fully protected and completely under the direction of the Lord because they carry the Lord in their heart with great enthusiasm and zeal.

There were several incidents like this where Srila Prabhupada’s remarkable qualities were exhibited.

Srila Prabhupada was always directed by Krishna. He wrote many books; about 70 books. Sometimes when a book came from the printer, he would spend hours reading the book.

Sometimes disciples would ask, “Prabhupada, you only wrote that book. Why are you reading it?”

Prabhupada would say, “No. I did not write the books. Krishna dictated and I was just writing.”

Once Srila Prabhupada asked a few devotees who were with him, “Why do you think I wrote all these books?”

Devotees gave different reasons. Someone said, “You wrote these books to tell us about the philosophy of Krishna, philosophy of Gita.”

Someone else said, “Prabhupada, you wanted to teach us about bhakti.”

Somehow Prabhupada was not satisfied. He said, “I wrote all these books to convince you to chant Hare Krishna.” 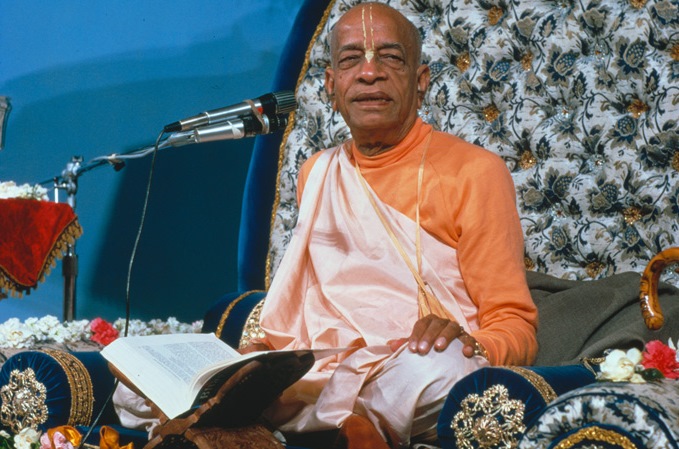 Chanting the Hare Krishna mantra is so important. The Lord’s avatar in this Yuga is in the form of the holy name. Srila Prabhupada wanted us to chant the holy name.

Scriptures and acharyas recommend that we should chant the holy name.

Let us chant the holy names of the Lord: